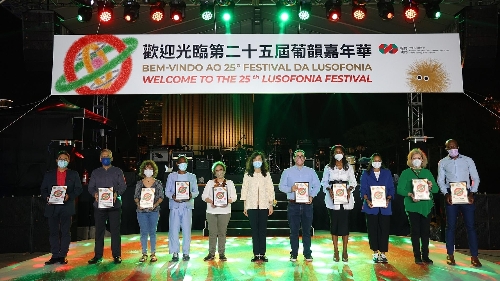 MACAU, October 28 – Under the patronage of the Social Affairs and Culture Secretariat of the Macao SAR Government, organized by the Cultural Affairs Bureau and supported by the Macao Government Tourism Office, the Municipal Affairs Bureau , TDM – Teledifusão de Macau, SA and the Institute of Tourism Studies of Macao, the 4e “Meeting in Macao – Festival of Arts and Culture between China and Portuguese-speaking Countries” is held alongside the 25e Lusofonia Festival, with the “Film Festival of China and Portuguese-Speaking Countries”, the “Traditional Music and Dance Show in the Community” and the “Chinese and Portuguese Picture Book Fair”, seeking to create a Sino-Portuguese cultural encounter theme park in areas near the Taipa Houses and Carmo Hall, and to provide unique multicultural experiences for residents and tourists.

The opening ceremony of the 4e “Meeting in Macao – Festival of arts and culture between China and Portuguese-speaking countries” and the 25e The Lusofonia Festival was held on October 28 at the Taipa Houses Amphitheater and presided over by Secretary of Social Affairs and Culture Ao Ieong U; Deputy Commissioner of the Ministry of Foreign Affairs of the People’s Republic of China in the Macao SAR, Sun Xiangyang; Deputy Director of Publicity and Culture Department of Macao SAR Central People’s Government Liaison Office Yin Rutao; the Consul General of the Republic of Angola in the Macao SAR, Eduardo Velasco Galiano; the Counselor of the General Consulate of Portugal in Macau, Manuel Ricardo Silva; the Counselor of the Consulate General of Mozambique in the SAR of Macao, Aurélio de Jesus Chiconela; Cultural Affairs Bureau Chairman Leong Wai Man; the director of the Macau Government Tourism Office, Maria Helena de Senna Fernandes; the chairman of the executive committee of Teledifusão de Macau, SA, Lo Song Man; Vice Chairman of the Municipal Affairs Administration Committee of the Municipal Affairs Bureau, Lo Chi Kin; Macao Institute of Tourism Studies Vice President Loi Kim Ieng; in the presence of the chief of staff of the secretary of social affairs and culture of the Macao SAR government, Ho Ioc San; Vice President of the Cultural Affairs Bureau, Cheong Lai San; Deputy Director General of Shenzhen Municipal Bureau of Culture, Sports, Tourism and Radio, Television Ding Zhongyuan; and representatives of various cooperative entities.

The 25the The Lusofonia Festival will be held from October 28 to 30, at the Taipa Houses. This year’s event will focus on Macau’s Macanese culture, including exhibits on Macanese food and handicrafts, and showcase the culture of each of the local Portuguese-speaking communities through their respective stalls, live entertainment music and dance, typical cuisine, games, among other contents with characteristics of Portuguese-speaking countries.

The first edition of the Lusofonia Festival was held in 1998 and over the years it has become an important event for sharing the culture of Portuguese-speaking communities, highlighting Macau’s role as a platform for cultural exchange between the China and Portuguese-speaking countries, marking its 25e anniversary (silver jubilee). Starting this year, each edition will focus on promoting the characteristic culture of one of the participating Portuguese-speaking communities or regions. This year, the focus will be on Macanese culture, with a focus on Macanese food and craft shows. Citizens and tourists can enjoy a variety of Macanese dishes, such as pork minchi, cabbage trouxas, chicken Chau-Chau Parida among other famous Macanese dishes in Macau.

A three-day event, featuring ten countries or regions of the Lusophone communities of Macao, namely Angola, Brazil, Cape Verde, Guinea-Bissau, Goa, Daman and Diu, Mozambique, Portugal, São Tomé and Príncipe, the East Timor and Macau community, will be set up, showcasing traditional music, crafts, costumes, typical drinks, tourist information, among others, of their country or region.

As part of the festival, the Shenzhen An Zhishun percussion art troupe and around 30 groups of local Portuguese-speaking performers will present on the main stage of the amphitheater of Taipa Houses typical percussion performances, songs and dances as well as only light music on the stage set up in Largo do Carmo, bringing a Portuguese touch to the atmosphere. The Festival offers a range of traditional Portuguese games for all age groups in Largo do Carmo on Saturday and Sunday afternoons, namely slippery pole climbing, wooden ski slope, tug of war and among others. Foosball tournaments will also be organized on Saturday and Sunday afternoons. There will also be a recreational area for children and a radio station, “Radio Carmo”, will be set up on site to broadcast music from Portuguese-speaking countries and regions throughout the Festival.

In addition, during the dinner period of the three days of the Festival, at Largo do Carmo, dishes from Macau and three Portuguese-speaking countries or regions of Macau will be served. The temporary restaurant in the Municipal Garden of Taipa will serve Portuguese dishes for dinner and lunch on Saturday and Sunday, including typical Portuguese grills and specialties from the participating Portuguese-speaking countries or regions. There will be a temporary kiosk set up on site which will serve typical Portuguese snacks and drinks.

During the event, residents can enter to win movie tickets for the opening film of the Film Festival of China and Portuguese-speaking countries at designated game kiosks. For technical reasons, the original opening film In Search of Lost Time will be changed to hero starring Zhou Xun, Sammi Cheng, Jackson Yee, and Stephen Fung, which tells stories of everyday people who search for love and hope during difficult times, displaying everyday people’s unusual perseverance and dedication to life.

The three-day Lusofonia Festival, which includes dances and songs, games, food and multinational flavors, allows the public to discover the splendid and dynamic side of the Portuguese-speaking countries or regions as well as to better understand the rich cultural heritage. of each of them. The event takes place simultaneously with the “Encounter in Macau – Festival of Arts and Culture between China and Portuguese-Speaking Countries”, with a series of activities such as the Chinese and Portuguese Picture Book Fair, screenings outdoors and wine tastings, inviting citizens to come and experience the festive atmosphere of the theme park. The Cultural Affairs Bureau hopes to enrich the cultural tourism experience of citizens and visitors through the Lusofonia Festival and a series of artistic activities, enhancing the effect of the event and creating a brand of Sino-Portuguese cultural experience. for Macau.

The Cultural Affairs Bureau will strictly follow the relevant epidemic prevention guidelines of the Health Bureau and make appropriate arrangements for arts and cultural activities. Participants should wear their own face mask, will have their body temperature measured, show the personal health code of the day, and cooperate with relevant epidemic prevention measures.

For more information, please visit the “Encounter in Macao – Festival of Arts and Culture between China and Portuguese-speaking Countries” website www.icm.gov.mo/FCP, the Facebook page “IC Art” or the WeChat page “IC do Instituto Cultural de Macao”.

Tangara participates in the 8th Dakar International Forum on Peace, Security in Africa