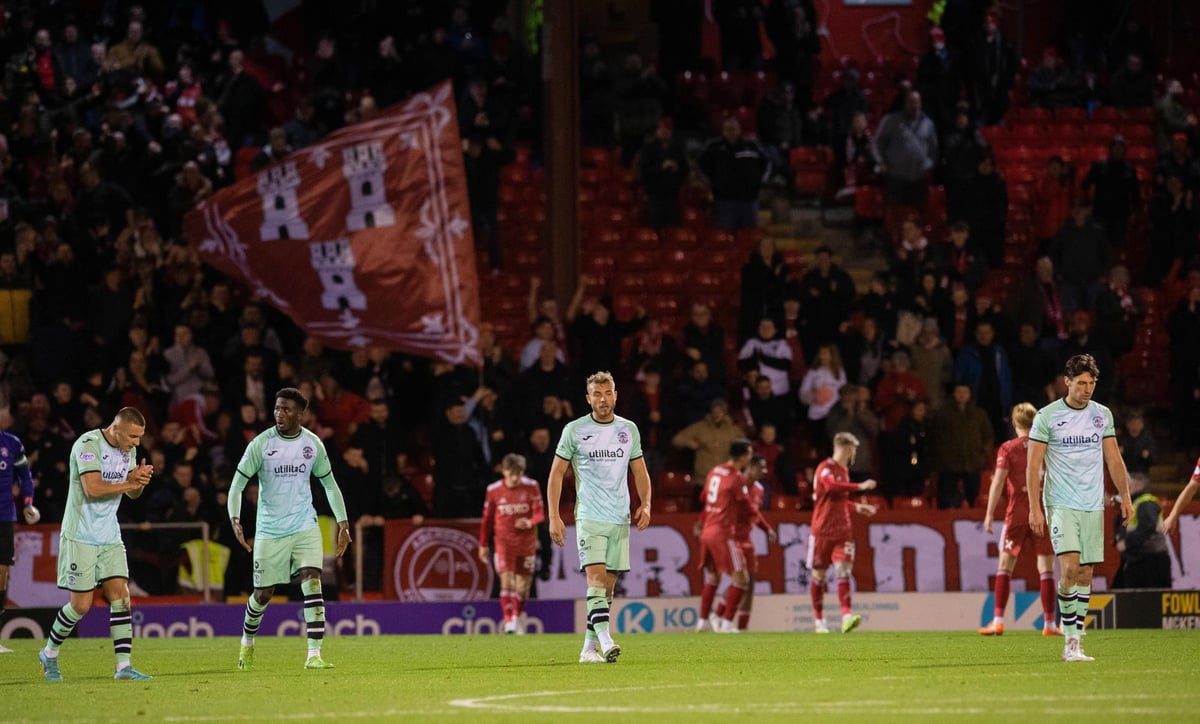 Aberdeen 4, Hibs 1: VAR steals the show on a familiar night for Hibs as Dons lift them to third place

An entertaining first half ended in chaotic fashion with over five minutes of checks ending in Miovski’s conversion on the second attempt after seeing his first effort saved by David Marshall, who was penalized for leaving his line. Mykola Kukharevych scored a consolation goal initially ruled out for offside before being brought down as the Dons edged past Hibs in third place.

The visitors were without Martin Boyle but failed to show him in the opening rallies. Kyle Magennis, restored to the starting line-up after returning from suspension, Ewan Henderson and Joe Newell all had a few chances each in the first half, Henderson coming closest with a clever header from Chris Cadden’s lobbed cross but Kelle Roos fired on a nice stop to swing the ball over the bar.

Newell and Kukharevych almost combined for the opener in the 20th minute after a quick move to the right, but the ball appeared to get stuck under the midfielder’s feet as he looked to pull the trigger. At the other end, Rocky Bushiri wiped clean after Luis ‘Duk’ Lopes reached the goal after giving Ryan Porteous a slip in midfield and ten minutes before the break, Marijan Čabraja cleared a shot virtually off from the line after the Cabo Verdean internationalist looked certain to open the scoring after a quick counterattack.

In added time of the first half, Lopes chased a ball into the box and fell as Marshall rushed from his line to smother the danger. The home fans demanded a penalty and thus began the long delay of VAR checks – first for an offside against Lopes, then for the penalty itself. The kick was eventually delivered, although it wasn’t out of the stonewall variety, and Marshall saved to his right from Miovski. Play continued but another VAR check was signaled and referee David Munro ordered a replay, believed to be for Marshall leaving his line. Miovski stepped up again, Marshall guessed correctly but couldn’t hold it off a second time. In the aftermath, the keeper appeared to kick the ball past the North Macedonia international and a small ram ensued on the goal line, with the Hibs skipper shown a yellow card.

Miovski scored his and the Dons’ second goal shortly after the restart, coming from a corner, and Ramadani made it three on the hour mark when his effort from the edge of the box flew with Marshall maybe blinded.

Johnson reacted by throwing over Elias Melkersen for Henderson and the Norwegian had an immediate impact, grazing Čabraja’s cross for Kukharevych who struck from close range. The flag was raised but after another VAR check the goal was awarded.

Any hopes Hibs might have had of an unlikely comeback were dashed when substitute Marley Watkins slipped the ball into the goal and the visitors failed to clear their lines, Clarkson brazenly heeled into the net at close range.

It’s not the first time the Hibs have dominated the start of a game with nothing to show – Johnson will now look to address that particular issue ahead of Tuesday’s visit to Ross County.