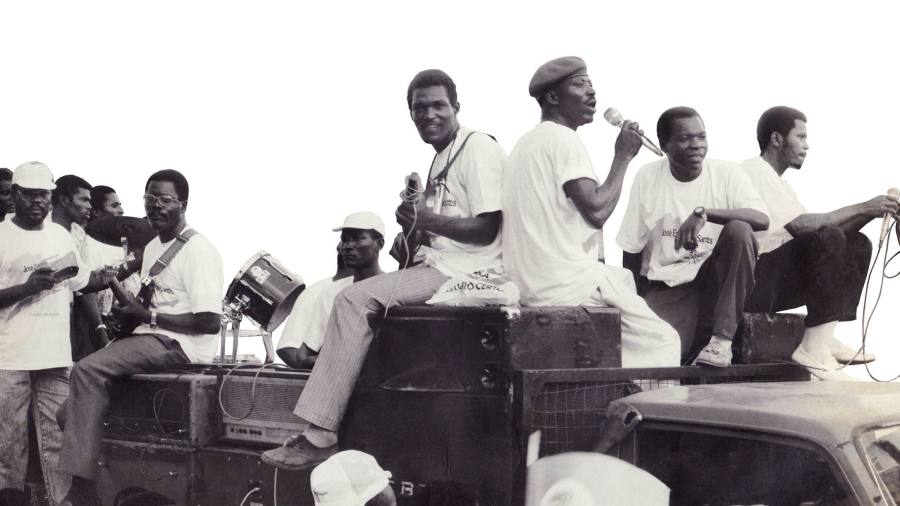 Swiss label Bongo Joe is on a mission to release musical gems from the African island nation of São Tomé and Príncipe, starting with the compilation Lifted Lifted, which focused on the 1970s and 1980s, including the country’s post-independence heroes África Negra. Today, French DJ Tom B has reworked rare and stunning records and cassettes to paint a fuller picture.

“Volume 1” might seem like overkill for a band that’s been around since the early 70s – how long will it take to record volume 2? — but África Negra is worth it. Favorites in the Portuguese-speaking world, they have never really had their due elsewhere, an oversight that this enticing overview should help to rectify.

Like most musical groups, the band started out as friends, meeting to rehearse in different parts of São Tomé. Unlike most bands, their name was first banned by the Portuguese colonial authorities, and for a time they performed as Girasol. The islands became independent from Portugal in 1975 and the group reclaimed its name. It was mostly a live phenomenon, but occasional recordings made live in the courtyard of the national radio station – its current studio was too small to hold the whole band, which, along with the brass and percussion, could count up to 12 musicians – were captured. and released by the Portuguese label IEFE.

Anthology Vol. 1 includes recordings that span from 1981 to 1996. It omits the three big hits: 1981’s “Aninha” and “Zimbabwe” and 1983’s “Mino Bô Bé Quacueda”, which were all on Lifted Lifted. The songs are not in chronological order, although the sonic world changes little over this decade and a half – a banging mix of rumba and soukous with touches of West African high-life.

Even the group is not the same everywhere. A tour of Cape Verde in 1989 was so successful that half the band decided to stay there; other members, notably guitarist Leonildo Barros, moved to Lisbon. The songs that are here are uniformly delightful, with Pacheco’s bass line rumbling beneath and popping out at times. The extended instrumental section of “Carambola” sees high-pitched, sparkling guitar riffs, some low and harsh, battling for prominence until a string of tricky notes wins out. The islands’ Independence Day is commemorated with the fast-paced “12 De Julho” dance, which speeds up halfway through and charges happily to the end.