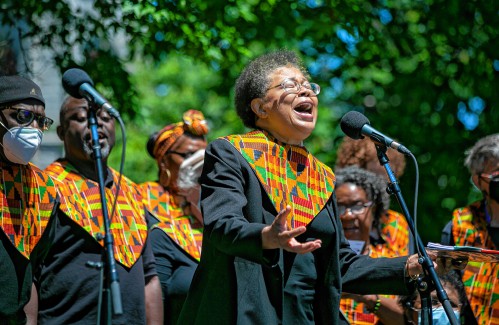 AMHERST — Sunday’s June 16 celebration on the Town Common featured speakers, music, dancing, food and many people coming together to celebrate the holiday in a city with rich ties to the Civil War .

Juneteenth commemorated on the day of 1865 when the last Americans slavery in Texas were emancipated. Texas was the last state in the union where slaves were freed under the proclamation, more than two years after it was signed. Juneteenth was officially recognized as a federal holiday last year.

Sunday’s Town Common celebration was part of an entire weekend celebrating Juneteenth. On Saturday, the June 19 Heritage Walking Tour took place, during which participants were able to visit Amherst’s Black and Indigenous historic sites. There was also an event at West Cemetery, honoring members of the 54th Massachusetts Volunteer Infantry Regiment and the 5th Cavalry, two Black Civil War units whose members are buried there.

“I couldn’t imagine what these people experienced,” said brace when asked what it meant for him. “It makes me honored, and I am honored to represent these soldiers.”

Asked about Juneteenth’s adoption and federal recognition, Brace said it was an important step. He also noted that most of those present at Sunday’s celebration were white and expressed his gratitude for their support.

Councilwoman Anika Lopes helped organize Saturday’s march. A seventh-generation Amherst resident, Lopes has family who fought in both the 54th Massachusetts and the 5th Cavalry. She also said that in their service in the 5th Cavalry, her family members were part of the force that ended slavery in Texas.

“Amherst himself is directly linked to the military acts which ended slavery on June 19, 1865,” said Lopes.

Lopes also launched a foundation, Ancestral Bridges, on Saturday that seeks to increase economic and cultural opportunities for Black, Indigenous and people of color in the region. Lopes is the president of Ancestral Bridges and the artist Shirley Jackson Whitaker is one of the members of his board of directors.

Lopes and Whitaker also helped form the Tote2Vote campaign, which will provide tote bags with food and water for people to keep with them while they line up to vote.

State Rep. Mindy Domb, D-Amherst, was a speaker Sunday and said this weekend’s Juneteenth event was the biggest she’s seen.

“Yesterday and today is a combination of resident engagement and city support in a way that’s just beautiful,” she said.

Domb was also a co-sponsor of the bill that made Juneteenth a holiday last year, an effort that was launched after Amilcar Shabazz, an Amherst resident, asked him and the senator Jo Comerford, D-Northampton, in acting.

Aimee Salmon, who is the founder and owner of Africana Dance & Fitness, led crowd members in the dance at Sunday’s celebration.

She also said the celebration means a lot to her as a black woman.

“Coming out of all races, all cultures, coming together, that’s really good,” she said.

Alex Evora of Amherst was selling his jewelry, which he makes from natural materials like stones and shells, at Sunday’s celebration. He said he sources his shells from Provincetown and Cape Verde, where he is from.

“I see the future of a new generation to make it bigger and bigger,” Evora said. “White and black together.”

He also described Amherst as the best town he knows.

Bera Dunau can be reached at [email protected]