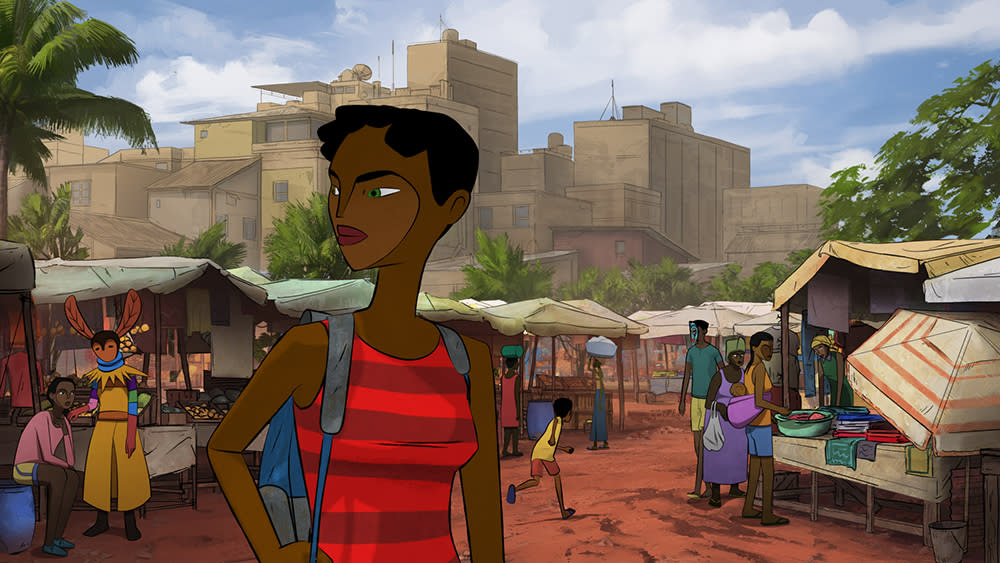 The first feature film by José Miguel Ribeiro “Nayola”, one of the two Portuguese animated images shown on Annecy Animation Film Festivaldepicts the fate of a grandmother, a mother and her daughter – Lelena, Nayola and Yara – in the aftermath of the Angolan civil war.

Nayola is looking for her husband, Ekumbi, who disappeared during the war. She abandons her daughter, Yara, at only two years old, who is then raised by her grandmother, Lelena. In 2011, she became a rebellious teen rapper.

The photo travels back and forth between 1995 and 2011, moving between richly saturated images of the Angolan landscape and dark, gray images of wartime destruction and urban decay, weaving together real-life settings and landscapes of dream.

Based on the play “A Caixa Preta” (The Black Box), by Angolan playwright José Eduardo Agualusa and Mozambican novelist Mia Couto, the screenplay was written by longtime Ribeiro collaborator Virgilio Almeida.

The €3.2 million ($3.37 million) pic is a co-production between Praça Filmes de Ribeiro in Portugal, SOIL and Luna Blue in Belgium, JPL Films in France and Il Lustre in the Netherlands. International sales are taken over by Urban Sales. It received development support from the Portuguese Film Institute (ICA) and Creative Europe, a €1 million production grant from the ICA, support from the Portuguese species and Eurimages.

Ribeiro spoke to Variety on the movie.

What was the initial inspiration for “Nayola”?

I was introduced to this story by my friend Jorge António, who has lived in Angola for over 20 years. He showed me the play and first suggested that I make a hybrid film combining animation and live action. We ended up choosing only the animation. I was already interested in this universe. My father fought in the colonial wars in Africa more than 50 years ago, which marked him deeply. He was a sergeant in Guinea Bissau. The trauma of the war marked him deeply. He still has trouble sleeping and has many nightmares. One of my first experiences with Africa was when I visited Cape Verde after finishing my stop-motion short “The Suspect”. It inspired me to make my 2010 animated film “A Trip to Cape Verde”, and my father’s experience led me to make my 2016 short film “Fragments”. When I went to Cape Verde, I realized that my own vision of Africa was essentially Western and colonial. The media tends to convey clichéd images of the African continent, such as famine and war. When I discovered the generosity of the people and the richness of the culture, with a vibrant human dimension, I fell in love with Africa. My desire to get closer to my own family history and to my father meant that when I read the play “A Caixa Preta” I was immediately drawn to it and wanted to bring my own experiences personal to this project.

What difficulties did you encounter for your first feature film, compared to your previous short films?

One of the biggest challenges was working with a lot more people. The director oversees the basic artistic vision, but must also manage various teams. It was very important to me that they all felt like they were part of their project and brought their own vision. For example, editors Ewin Ryckaert from Belgium and Job Terburg from the Netherlands played a vital role in the final pacing and structure. Another key challenge was to ensure the authenticity of the film, since it takes place in Angola, while I have lived most of my life in Portugal. During the development phase, I took an intensive two-week trip to Angola in 2014, with my screenwriter Vírgilio Almeida and producer Ana Carina. We spent time in the capital Luanda and traveled to remote villages where we spoke to people from different tribes. Vírgilio also has family ties to Angola and brought that experience to the screenplay. We returned to Angola in 2019 to rehearse with the actors and record the dialogue, which was a very dynamic and creative period during which the actresses, in particular, introduced many new ideas.

The film has a powerful and eclectic visual style

“Nayola” is essentially a road movie and involves many graphic universes. One of the most interesting things in a road movie is traveling through different landscapes. It also allowed each of the co-producers, who until now had focused on animated shorts, to bring their own vision to the film. Some scenes are more impressionistic, others are more realistic and monochromatic. I always thought the film should have a visual style that mixes elements of reality and fantasy. I collected photos of the different sets to give a realistic dimension to certain animations. We also recorded the rehearsals with the actors, which were used by the designers during the animation. From the start, I wanted to explore a very expressionist style based on my experiences in Angola, where one feels a presence of intense colors, like red earth, or blood red sunsets and powerful aromas. The local population lives in close contact with nature. They can see a tree or a stone and see the aftermath of someone who died. In the West, dreams are clearly separated from reality, but in Africa they are linked. This duality is particularly evident in times of war – as we are currently seeing in Ukraine. Lives are suddenly turned upside down. You can enter a frozen and abandoned house or kitchen. It creates a sort of altered fantasy space that I wanted to explore in this film.

Was it a challenge to make a film that revolves mainly around female characters?

Yes! The actresses made essential contributions to the scenes and dialogues. I asked a Portuguese illustrator, Susa Monteiro, to supervise the dream sequences, because she has a very particular vision which enriches the film. The creative team included many other key female colleagues, such as assistant director Catarina Calvinho Gil and animation director Johanna Bessiere, who oversaw all animation, layout and 3D storyboard.

What was your inspiration for the character of teen rapper Yara?

This was a major turning point in the film’s development. The idea originally came from the arrest of rapper Luaty Beirao and 16 activists in 2015 who were accused of planning a rebellion against President Jose Eduardo dos Santos and jailed. Luaty then went on a hunger strike and they were all eventually released. By accompanying these events, I realized that I didn’t want to make a film only about the past. I wanted to talk about the main challenges facing Angola today. I discovered Medusa in a YouTube video and asked her if she would be willing to take on the role of Yara and she agreed. This gave a missing organic element to the script. Elisangela Rita who plays Nayola is a spoken word artist. Vitória Soares, who plays grandmother Lelena, is a very experienced actress. They all brought their own take on the film and made sure the language and street slang used in the film was up to date.

What are your expectations for the film?

As I have been working intensively on this film for eight years, my main hope is that it will circulate internationally! It’s a film primarily for an adult audience, but I’m very curious to see how teenagers react to the film, especially in Portugal. I don’t know how they will react to this vision of Angolan culture. Very little reaches us in the West on these themes. I hope the film will offer a window on the cultural richness, the generosity of the people and the great aesthetic beauty of Angola.

The best of variety