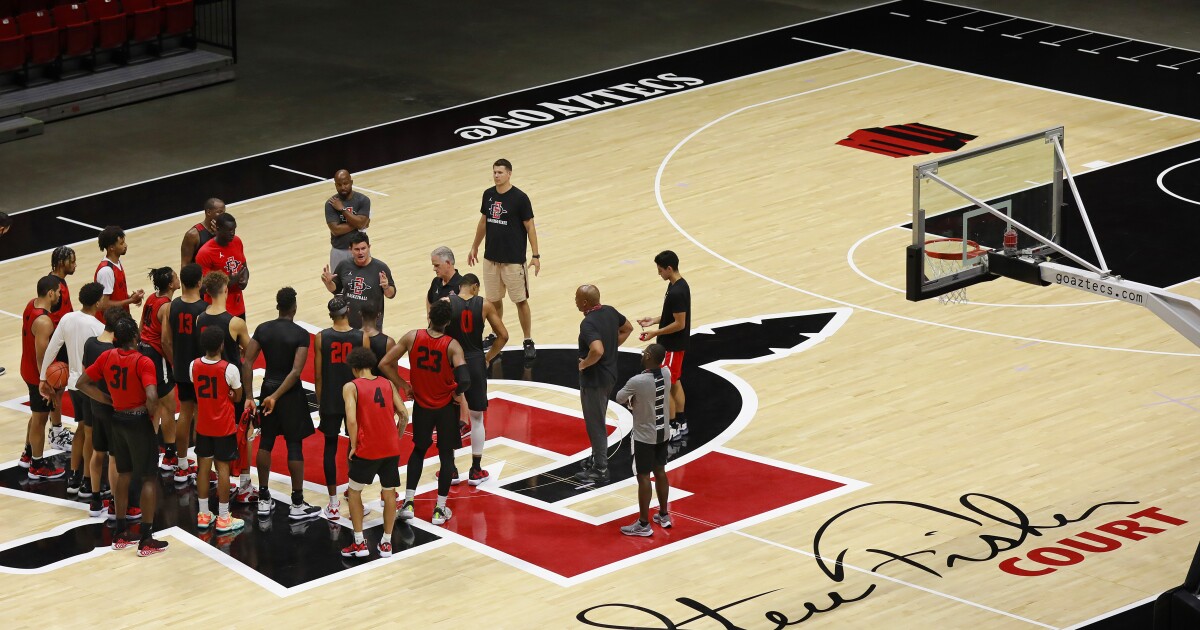 The Los Angeles Clippers were at the JAM Center for the start of a five-day training camp.

The Aztecs weren’t the only local team to lend their normal training venue to NBA clubs. The Brooklyn Nets are at USD, the Denver Nuggets at UC San Diego.

College players are not permitted to watch training camps in person as NBA staff cannot interact with draft-eligible players until the end of the season. But SDSU coaches were allowed in and watched ex-Aztec-free Clippers Kawhi Leonard (who was back in LA rehabilitating his right knee after ACL surgery).

When the Nuggets trained at the JAM Center in 2018, Aztecs coach Brian Dutcher and his team were intrigued by Michael Malone’s offensive plans and incorporated some of them into their own playbook.

“We will have the opportunity to talk to them about what we see there, what the next level looks like,” Dutcher said of his players. “I think they have an idea. Just let them know how hard they work up there, and that hard work is everything. Talent is one thing, but if it doesn’t equate to hard work, it’s untapped potential.

The message seemed to have been received. The Aztecs had a fiery 90-minute training session that showed a team already well advanced defensively. There was a brief five-on-five session at the end that resulted in some lay-ups from one of the highest rosters in school history.

“We have tremendous size and strength,” said Dutcher, who has six 6-foot-9 or taller players, “and that will make the daily training with these big guys down. If I was a goalie I wouldn’t want to. not go in. I would stay outside and shoot all 3 that I could instead of going into the paint with these guys.

Teams are entitled to 30 practices in the six weeks (or 42 days) before their first official match. That’s five a week. The Aztecs typically take off on Wednesdays and Sundays, with Saturdays generally reserved for intra-team scrums.

Several new players were on display for the Aztecs at Viejas Arena. So was a newly repainted courtyard.

The most notable difference is that “Steve Fisher Court” has been moved from the sideline along the benches and the scorers table to the opposite side on the field in accordance with TV cameras, with a “Steve Fisher” signature. instead of uppercase letters. It sits under an enlarged Aztec logo that covers the entire central jumping circle and much of the pitch.

The Mountain West and Viejas logos are now inside the 3-point arc instead of closer to midfield.

Senior goalkeeper Adam Seiko returns to SDSU after spending two weeks in Rwanda playing for Uganda at AfroBasket, the continental national team championship. Seiko started off and averaged 13.0 points, second on the team behind 13.2 by Arthur Kaluma, his younger brother who is a 6-7 freshman at Creighton.

Seiko averaged 24.8 minutes in five games, helping Uganda out of the pool and upset Nigeria in the round of 16 before being knocked out by Cape Verde in the quarter-finals. He shot 15 of 32 from behind the 3-point arc (46.9%), made his 10 free throws and had 14 assists against six turnovers. He scored a peak of 20 points in an 80-66 victory over Cameroon.

“Confidence is everything in basketball,” Dutcher said. “Adam has great confidence in his game right now. Playing in the African tournament has helped him. Hopefully that will continue this season with the Aztecs.”

Tickets for the Wooden Legacy Thanksgiving tournament at the Anaheim Convention Center Arena go on sale Friday morning. The SDSU takes on Georgetown on Thanksgiving night at 8:30 p.m. and USC or Saint Joseph’s the following night.

Tickets are sold online only, presented on a mobile device, or printed from a computer. There will be no box office for walk-in sales. For more information, visit espnevents.com/wooden-legacy/tickets.