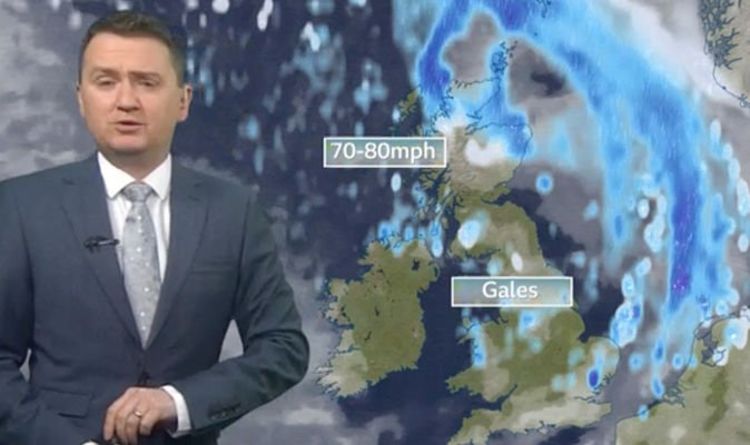 BBC weather forecaster Matt Taylor said a short-lived weather system will bring milder air to the UK, pushing thermometers up to 15 degrees for some this weekend. But he warned conditions were expected to turn colder again as another front moved across the country, bringing heavy rain and potential snow as well as gales for Scotland and Northern Ireland. Mr Taylor said: “For some, tonight will be a little milder than what we’ve seen throughout the day.

“An incredibly mild Saturday, we have these winds still coming in from the mid-Atlantic.

“Notice a weather system that will spread across northern Scotland bringing high winds, heavy rain, turning the weather front south on Saturday and then introducing a colder airflow.

“Saturday starts out fairly mild but will get a bit cooler. This is the boundary line, a narrow band of heavy rain that will head south.

“Cloudy in the south, clearing to the north, temperatures starting to drop in the afternoon.”

JUST IN: Met Office Weather Warning: Yellow alert issued as UK to be hit by 75mph storm in 8 HOURS

He continued: “We will see things get a bit sunnier, but it will be a windy afternoon.

“Parts of Scotland and Northern Ireland are where we see the strongest winds – gusts of 60mph, 70mph possible for one or two.

“It will take the feeling of things even colder than the suggested 6C in the afternoon, 14C, 15C in the south.

“Until Sunday morning the strongest winds in Orkney and Shetland will dissipate, lighter winds, a touch of frost around, but the next weather system is coming for Sunday.

READ MORE: Mapped snow forecast: Will snow fall near me this weekend?

“Dry and bright start once again, the best of the sun to the south and east mostly obscuring although heavy rain in Scotland, Northern Ireland preceded by snow and winds will continue to strengthen .

“Actually in the evening there is the potential for damaging winds in parts of Scotland, particularly Northern Ireland. One to watch.”

Before conditions turn colder this weekend, however, the BBC weather forecaster noted that Britons south of Scotland will most likely experience mild conditions until Friday.

He said: “After a bright start with some hazy sunshine, you will all notice the clouds rebuilding.

“The cloud we have at the moment is just a high cloud, but this cloud here, leading out to the Atlantic, will bring rain to northern Scotland while carrying this milder air from the Azores, so temperatures will gradually rise throughout the day.

“This morning is a dry start to the morning drive in most parts, but it will get wetter as the day progresses in the far north of Scotland.

“Could see some light rain splashes further south as cloud thickens, wet and drizzly weather around western coasts and hills in England and Wales.

“Most parts of northern Scotland will remain dry, still some sunny spells around the east. Not as mild as yesterday, but temperatures continue to climb.”