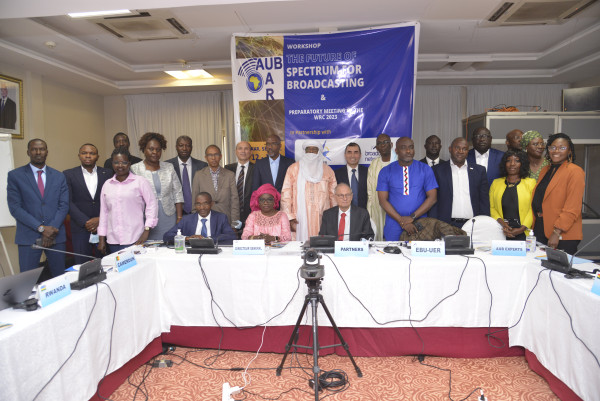 The AUBs (www.uar-AUB.org) International Workshop on “The Future of Spectrum for Broadcasting” was launched on Tuesday, April 12, 2022 in Dakar, Senegal.

The solemn ceremony was chaired by Mrs. Evelyne T. FAYE, representing the Director General of AUB, who highlighted the Union’s position regarding spectrum management in the African audiovisual landscape.

Mr. Lars Backlund, Secretary General of Broadcast Network Europe (BNE) presented the white paper which explores the importance of protecting the band below 700 MHz for terrestrial broadcasting. The white paper has been written on behalf of AUB, EBU and BNE to provide a basis for an informed decision in the context of the upcoming World Radiocommunication Conference 2023. It also explains the challenges and risks associated with the allocation of spectrum to telecommunications.

According to Mr. Ousseinou Dieng, special envoy of the Ministry of Culture and Communication of Senegal: “We must focus on development issues. At the international level, we have had meetings with UNESCO to defend the issue of access to information through SDG 16.10 where the media struggles not only to guarantee freedom of expression but also to access the ‘information. The COVID19 pandemic proved us right because we were forced to rely only on a few community radios to track and fight the Covid in remote areas. We need to broaden the spectrum because our ambition is to have community television stations with pronounced cultural diversity.

Mr. Amadou Diop, Director General of Télédiffusion du Sénégal (TDS) specified the various strategies to be put in place to raise the level of the debates. According to him, African broadcasters are generally absent where technical decisions regarding spectrum management are made. He therefore urged governments to heed the call from broadcasters for the “no change position” for the allocation of the 700 MHz band spectrum.

The participants had the opportunity to share their experiences according to their respective regions (SADC, ECOWAS, EACO). They have also been trained in the best approach to defending the continent’s position in WRC 2023.

The AUB Day 2 workshop will allow participants to come up with solid recommendations and resolutions for better management of the 700 MHz band spectrum.

Distributed by APO Group on behalf of the African Broadcasting Union (AUB).

This press release was issued by APO. Content is not vetted by the African Business editorial team and none of the content has been verified or validated by our editorial teams, proofreaders or fact checkers. The issuer is solely responsible for the content of this announcement.

São Tomé and Principé: how the waves wash away the trees of an island nation