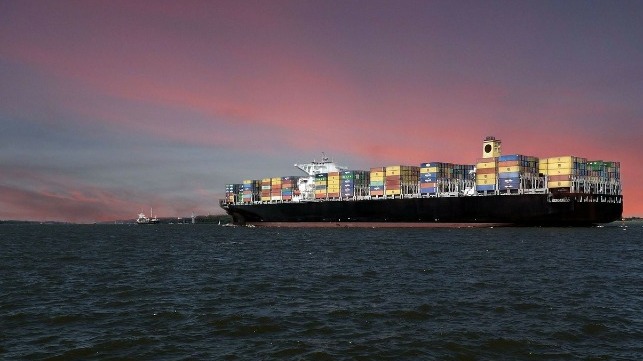 Prospects for electric battery-powered container ships across the North Atlantic

Many years ago, University of Michigan business professor CK Prahalad wrote Competing for the Future, in which he explored a concept called “convergence of technologies.” A convergence of technologies involving advancements in container ship design and advances in battery technology offers the prospect of a large battery-powered electric container ship actually sailing between the ports of Algeciras and Halifax, across the North Atlantic.

The advent of lower-cost solar and wind power has spurred the development of energy storage technologies, including low-cost grid-scale energy storage batteries. Although some grid-scale energy storage systems are not mobile, it is in fact possible to adapt other grid-scale storage technologies for mobile operation in transport vehicles at high speed. large-scale, such as ships. The size of container ships has increased over the past 40 years, with larger ships offering up to 24 times the capacity of smaller container ships.

Researchers involved in the development of energy storage focused on a low-cost, long-life technology that would be recyclable. Combining advancements in low-cost electrochemical energy storage with advancements in container ship development offers the prospect of a battery-powered container ship that could cross the North Atlantic Ocean, with the shortest route connecting the western Mediterranean transshipment terminal at Algericas with the Port of Halifax in eastern Canada, at a distance of 3,300 nautical miles. Recent developments in revolutionary container transfer and vertical container stacking technologies promise to improve future container transshipment at the Port of Halifax, connecting Boston and Montreal.

While container ships can sail at top speeds of between 22 and 26 knots, some operators save fuel and pass the savings on to customers by sailing at half that speed. This precedent indicates a market segment for low speed service. Development is underway to introduce a next-generation wind-powered freight vessel to the North Atlantic service, serving a segment of the market that seeks to reduce supply chain carbon emissions. The advent of low-speed navigation and the expected introduction of wind-powered vessels on the North Atlantic service suggests a market for battery-powered container ships.

A 12,000 TEU capacity container ship with a width of 158 feet and a length of approximately 1,100 feet can be used as a base for a battery-powered transatlantic vessel. The 60,000 horsepower diesel engine and fuel tanks will be phased out and replaced by 720 forty-foot containers carrying batteries, split into two tiers of 360 containers each. Each container would contain 4,000 kWh of battery, giving a potential of 2,880,000 kWh of stored energy. Sailing at 11 knots would require 1/16 of the sailing power at 22 knots, or about 7,500 horsepower.

At 11 knots, the vessel could sail for 480 hours and travel over 5,000 nm carrying 10,000 TEUs. It could depart from any location in Algeciras, Tangier or Rotterdam and stop in Halifax for partial battery recharging and container transshipment, then sail to Newark. A larger Triple-E class container ship with 880 battery containers could carry 16,000 TEUs on the same route at a speed of 13 knots.

The Azores are located 1,200 nm from Algeciras and 1,500 nm from Rotterdam and represent an ideal location for partially recharging transatlantic vessels powered by “plug-in” batteries. Partial recharging in the Azores would allow large battery-powered ships to navigate between Western Europe and US east coast ports such as Jacksonville, Charleston, Norfolk and Newport News. It would also allow a smaller battery-electric vessel to navigate between Western Europe and the Port of Quebec. Possible energy sources could include advanced nuclear technology, floating wind power with terrestrial energy storage, floating energy storage, or charged liquid electrolyte (for vanadium flux batteries).

Battery-powered electric ships sailing between Western European ports and ports on the US Southeast Coast such as Savannah, Jacksonville and Charleston as well as New Orleans would also benefit from the development of a charging station in Bermuda. A charging station in Bermuda would allow battery ships from Europe to navigate to the Panama Canal, where an additional charging station might be possible to allow ships to sail north to Los Angeles and south to ‘in Lima and Santiago.

There are three main competitors capable of providing mobile renewable energy storage technology suitable for the propulsion of ships. AMBRI of Boston offers liquid metal battery technology that can withstand more than 20,000 deep cycle discharges. A 40-foot container of their batteries can provide 4000 kWh of energy storage and must be recharged during port calls. Vanadium Corp. Resources offers liquid electrolyte battery technology, where negative and positive electrolytes are transported in separate insulated tanks. To generate electricity, pumps circulate liquid electrolyte through stacks of cells, with reservoirs offering 40 watt-hours per liter of energy storage (with expectations that the power density will increase to more than 60 Wh / l). While in port and at recharging stations, pumps could exchange discharged electrolyte for recharged electrolyte, with massive volumes of discharged electrolyte being recharged at ports and recharging stations. 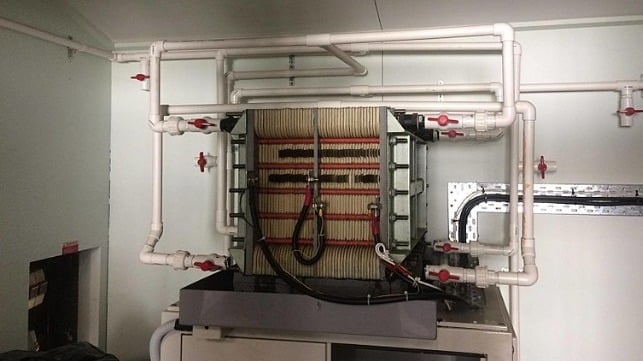 A redox vanadium battery located at the University of New South Wales (Radiotrefoil / CC BY SA 4.0)

Recent advancements have taken place in mobile wind power technology, including airborne or flying sails, Flettner rotating cylindrical rotors, extendable height aero sails, and even deck-mounted wind turbines. It would be possible to combine certain wind technologies with the propulsion of electric battery ships. When traveling east from North America to Europe, airborne kites are said to help electric propulsion increase navigation speed while conserving battery power. Depending on the wind speed when traveling east, an airborne or deck-mounted wind turbine could help recharge batteries at sea.

The difference in angle between wind direction and sailing direction, as well as the difference between sailing speed and wind speed, would determine whether to deploy technologies such as Flettner rotors or mounted aero sails. on deck to help propel ships. Such assistance would reduce battery consumption and reduce the duration of electric charging stations.

The convergence of contemporary maritime and mobile energy storage technologies provides the basis for exploring the possibility of battery-powered transatlantic ship propulsion. While technically possible and theoretically capable of traveling long distances, many maritime economists would question the feasibility of battery-powered container ships connecting Western Europe to North and South America across the Atlantic Ocean. Conversely, conservationists would argue for the introduction of such ship technology on international trade routes. While converting a container ship to a rechargeable battery would reduce the overall payload capacity, it could carry enough payload to be viable.

The opinions expressed here are those of the author and not necessarily those of The Maritime Executive.