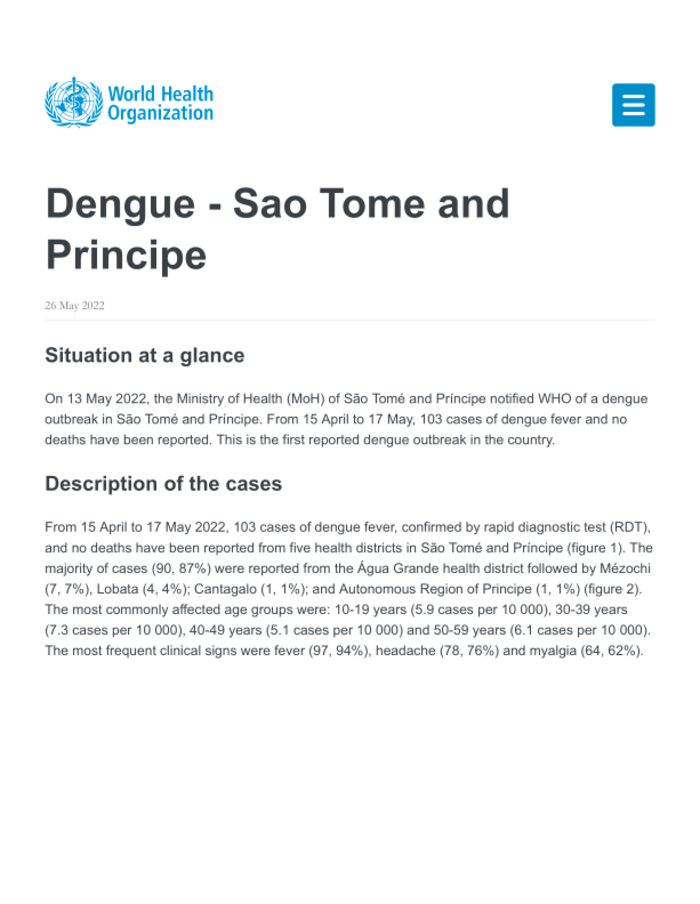 The situation at a glance

Description of the cases

A subset of 30 RDT-confirmed samples was sent to an international reference laboratory in Lisbon, Portugal, which was received on April 29. Further laboratory testing confirmed that the specimens were positive for early acute dengue infection and that the predominant serotype was dengue virus serotype 3 (DENV-3). Preliminary results suggest the possibility of other serotypes present in the sample batch.

A dengue outbreak alert was initially triggered when a suspected case of dengue fever was reported at a hospital in São Tomé and Príncipe on April 11. This case, who presented with symptoms suggestive of dengue infection, had a travel history and was later diagnosed as having previously been infected with dengue fever.

Dengue fever is a viral infection transmitted to humans through the bite of infected mosquitoes. Dengue fever occurs in tropical and subtropical climates worldwide, primarily in urban and semi-urban areas. The main vectors of transmission of the disease are Aedes aegypti mosquitoes and, to a lesser extent, Ae. albopictus. The virus responsible for dengue fever is called dengue fever virus (DENV). There are four DENV serotypes and it is possible to be infected four times. Many DENV infections produce only mild disease and more than 80% of cases have no symptoms (asymptomatic). DENV can cause an acute flu-like illness. Sometimes this develops into a life-threatening complication called severe dengue fever.

There is no specific treatment for dengue fever; however, prompt case detection, identification of any warning signs of severe dengue, and appropriate case management are key elements of care to prevent patient deaths from dengue. A delay in seeking medical attention is often linked to deaths from dengue virus disease.

Occasional cases acquired abroad have been reported in people returning from an area with active dengue transmission, however, there is no conclusive evidence that there have been imported cases of dengue in São Tomé and Principe. Prior to this outbreak, São Tomé and Príncipe had never reported a dengue outbreak, despite being in the global dengue belt and having favorable conditions for dengue transmission.

National health authorities have initiated and are undertaking the following measures in response to the outbreak:

The risk at the national level is currently assessed as high due to (i) the presence of the mosquito vector Aedes aegypti and Aedes albopictus; (ii) favorable environment for mosquito breeding sites following heavy rains and floods since December 2021; (iii) simultaneous outbreaks of diarrheal disease, malaria, COVID-19, among other health issues; and (iv) reduced functionality of sanitation and water management systems in health facilities due to structural damage after heavy flooding. Reported numbers are likely underestimated as a high proportion of dengue cases are asymptomatic and there are limitations to the ability to conduct surveillance and diagnose cases. The clinical management of severe dengue cases is also a challenge. Community awareness in the country is low and risk communication activities are insufficient.

The overall risk at regional and global levels is assessed as low. The likelihood of further spread from São Tomé and Príncipe to other countries is unlikely as the country is an island that does not share land borders and this would require the presence of susceptible vectors.