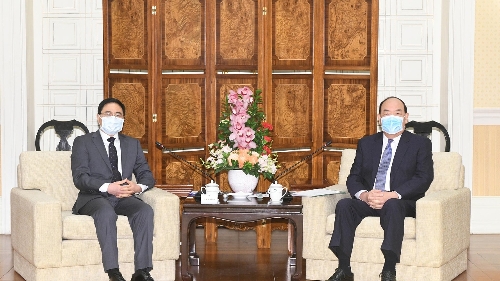 Ho made the remarks on Thursday (January 27th) during a meeting at the government headquarters with Secretary General of the Permanent Secretariat of the Forum for Economic and Trade Cooperation between China and Portuguese-Speaking Countries (Macau), Mr. Ji Xianzheng.

The chief executive added that he looked forward to the permanent secretariat of the Macau Forum, under the leadership of Mr. Ji, to further expand trade and commerce between China and Portuguese-speaking countries.

The Chief Executive further provided an update on Macao’s latest economic development and the effectiveness of the Macao government’s anti-epidemic measures. The stringent controls applied by the Macao government over the past two years were aimed at protecting Macao’s public, Ho said.

It had become clear in the wake of the pandemic that the city was too dependent on the tourism industry, Ho said. The Macau government would devote more effort to accelerating proper economic diversification. In 2021, the release of the Guangdong-Macao Intensive Cooperation Zone Master Plan in Hengqin had helped establish the conditions for further developing Macao and created new opportunities for the city’s economic diversification.

During Thursday’s meeting, Ji expressed his gratitude for the Macao government’s support for the Macao Forum, adding that all participating governments have paid great attention to the Macao Forum’s work. Building on the path charted by the previous five editions of the Macau Forum Ministerial Conference, the body will pursue its founding objectives and is committed to furthering Macao’s role as a bridge between China and Portuguese-speaking countries. , and to advance trade levels between the two parties. Such measures would ultimately promote the joint development of mainland China, Macao and Portuguese-speaking countries.

Ji went on to say that as a multilateral cooperation mechanism to form consensus and encourage joint development, the Macao Forum will continue to gather opinions from various parties and strengthen initiatives to implement the decisions made. over the last five editions of the Ministerial Conference. The objective was to innovate in working methods and explore new areas to serve and meet the development needs of each participant in the Macau Forum.

Corsair flight from Martinique to Paris is diverted to Lajes, Azores, after captain falls ill over Atlantic