EllaLink ensures the commercial launch in May of its submarine cable

“The commercial launch will take place in May. I’m sure of it, ”said Phillipe Dumont, CEO of EllaLink at the Capacity Latam event regarding the delay in the cable link between Brazil and Portugal.

The cable was announced in 2017 but the planned commercial launch date has changed from 2020 to 2021. Now, after being successfully deployed, the company assures that the cable will be operational next month.

“It’s the same distance between Brazil and Portugal as New York or Virginia. So, we realize that it is not necessary to go through North America to supply the South [America]Dumont said of the benefits of the first cable that will link South America directly to Europe. He said the line will halve the latency between the two continents.

The cable will connect Lisbon and Fortaleza, with branches in Madeira, the Canary Islands and Cape Verde. It will also link Madrid and Marseille.

A deal with Infinera to light the nearly 6,000 km underwater route was announced in March.

EllaLink recently signed a memorandum of understanding with a traffic exchange point operator, DE-CIX. Lisbon is expected to become Southern Europe’s entry point into the neutral interconnection ecosystem, consisting of five DE-CIX IXs located in Lisbon, Madrid, Barcelona, ​​Marseille and Palermo. From there, a low latency path can be offered to DE-CIX and EllaLink customers.

The company has also entered into an agreement with Equinix to build and manage three interconnection PoPs in the Equinix data centers in Madrid, Lisbon and São Paulo. 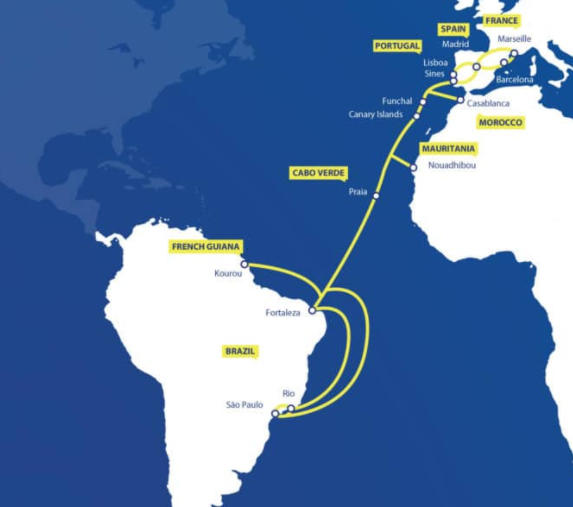 To continue reading, subscribe to BNamericas to get all the information in this article and access related news and reports.