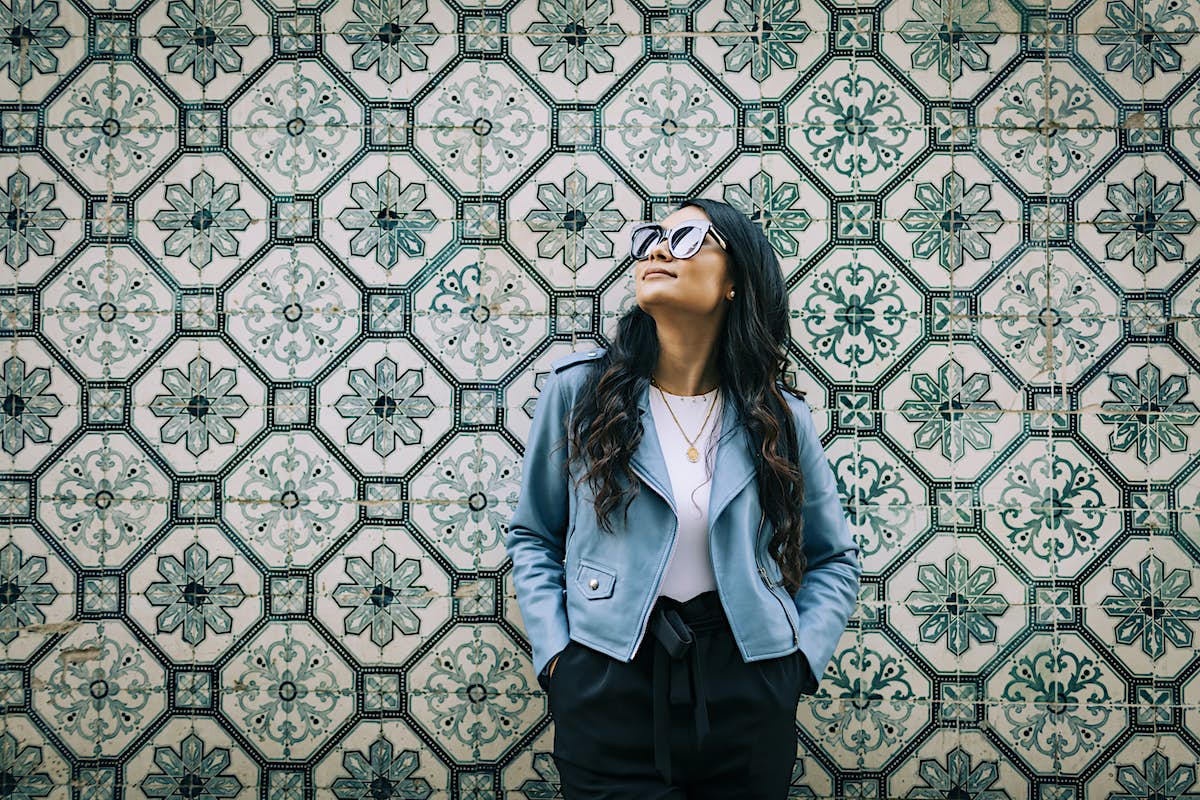 With its streets full of iconic hand-painted tiles, Lisbon has exhibited art outdoors for centuries. Beyond the beautiful facades of the houses above ground, azulejos (hand-painted tiles) invade the city’s underground network in the form of abstract paintings and colorful caricatures.

This traditional style of ornamentation is just the beginning of the outdoor artistic experience in Lisbon. At street level, artists have transformed entire neighborhoods with giant murals and colorful graffiti. It’s a constantly changing canvas – just when you think you’ve seen it all, a new mural appears on a disused pavement or downtown wall.

The art of Lisbon tiles

It was the Moorish rulers of medieval times who brought the taste for tiles to the Iberian Peninsula, with the first decorations appearing in Andalusia as early as the 13th century. During a trip to Seville in 1498, Portuguese King Manuel I fell in love with the beauty of azulejos tiling and brought the tradition to Portugal, kick-starting a national ceramics movement.

Initially, tiles were used to adorn churches, palaces and even gardens, as a sign of status and wealth. But after Lisbon was devastated by the 1755 earthquake, tiles became a practical material for rebuilding Portugal’s bouncing capital. The trend continued for centuries, giving rise to the iconic tiled facades that adorn the city today. A visit to the Museu do Azulejo is a must if you want to delve into the history of this ceramic art form.

Beyond the endless geometric patterns adorning gables, fountains and facades, some panels are distinguished by their complex figurative scenes. Near Largo do Intendente square, the former Fábrica Viúva Lamego ceramics factory attracts visitors with its floral motifs and Asian figures that recall Portugal’s ties to the Far East. At Largo Rafael Bordalo Pinheiro, tiles are used to create striking Masonic elements.

Perhaps the most ambitious use of azulejos is found in the wall panel designed by André Saraiva in Campo de Santa Clara. More than 50,000 tiles make up this massive 21st-century mural, which depicts some of the city’s major landmarks in a bold, modernist style.

While it’s tempting to buy azulejos tiles at the flea markets of Lisbon, unfortunately some have been taken from the facades of the city. If you’re looking for a souvenir, head to Cortiço & Netos instead; this family owned shop has a collection of responsibly sourced tiles ranging from the 60s to the 90s, including some rare finds. Alternatively, you can grab a paintbrush and paint your own tiles at a local. workshop (workshop) like Cerâmica São Vicente in Alfama.

Get more travel inspiration, tips and exclusive deals straight to your inbox with our weekly newsletter.

Art has also found its way into metro stations across the city, with illustrations, quotes and even stained glass structures featured throughout the Lisbon Metro network. The metro first arrived in Lisbon in 1959, and with it came the rediscovery of the versatility of the azulejos floor tile. The painter Maria Keil was among the first artists to fill these urban spaces with luminous and contemporary creations. Over the years, other artists have stepped in, transforming the underground into a giant art space.

Each station has a different atmosphere and vibe. You can see some of Keil’s minimalist tile designs at Restauradores Station, alongside designs by abstract Nadir Afonso. At the Aeroporto stop near Lisbon airport you’ll find black and white caricatures of Portuguese national icons, while the Oriente stop is full of ocean-themed murals commissioned for Expo 98 It’s also worth stopping in Olaias, where industrial metal columns stand out against bright stained glass ceilings.

The best neighborhoods in Lisbon for urban street art

In Lisbon, street art and history go hand in hand, and a new generation of graffiti-inspired street artists are taking the city as their backdrop. Neighborhoods like Alfama and Mouraria are an outdoor exhibition space for fado-themed street art. A tribute to Severa, the city’s first fado singer, can be seen halfway through Escadinhas de São Cristovão, while the legendary Amália Rodrigues has her face rendered in a cobbled wall on Rua de São Tomé.

Around Graça you can spot references to the Carnation Revolution which removed the Estado Novo regime in the murals of Shepard Fairey (the street artist behind the global phenomenon Obey). There are also nods to literary characters here, like the psychedelic illustration of poet Fernando Pessoa by AkaCorleone on Rua Damasceno Monteiro.

Art has also helped reshape many of the once dilapidated neighborhoods on the outskirts of Lisbon. LX Factory in Alcântara is proof of the reborn power of art; this former textile factory now houses creative workshops mixed with striking pieces of urban art. Among them is a giant bee made from a mixture of paint and recycled waste – a signature style for local artist Bordalo II, whose work aims to expose the excesses of consumerism in today’s world. today.

The industrial district of Marvila has also become a sort of open-air museum. This is where you’ll find the work of the Underdogs Gallery, the cultural project behind many of the city’s most ambitious street art collaborations.

Most of the large-scale murals you’ll see in Marvila emerged during the MURO art festival in 2017. But new pieces are still popping up, like the basketball court painted by AkaCorleone in 2020 at Campo dos Mártires da Pátria near Chelas. This brightly colored artwork pays homage to neighborhood icon and basketball enthusiast Oliveira Donbell, and also nods to Michael Jordan’s legendary team, the Chicago Bulls.

Further afield, near Lisbon Airport, there is more must-see art at Quinta do Mocho. For years this neighborhood had a bad reputation, linked to drugs and crime, but in 2014 the O Bairro i O Mundo initiative invited national and international artists to revamp many of the neighborhood’s dilapidated facades, creating a new street art sensation. . Artwork reflects the neighborhood’s social and cultural diversity and musical influences, with portraits of locals alongside famous musical artists such as Eminem and Bob Marley.

For art lovers with a tight schedule, here is our selection of works of art to discover for a taste of Lisbon’s exuberant creativity.

How to explore Lisbon’s street art

Walking is the best way to experience the city’s colorful tiled panels and street art murals. The Galeria Arte Urbana website is the perfect resource for planning a self-guided tour, with information on street art across the city.

It pays to time a trip to coincide with the MURO urban art festival in July. A who’s who of national and international artists arrive every year to creatively revamp a new neighborhood in Lisbon. For tours that explore the background stories behind iconic street art, contact Lisbon Street Art Tours, or better yet, join one of their spray painting workshops.

A young adventurer sets out from Richards Bay