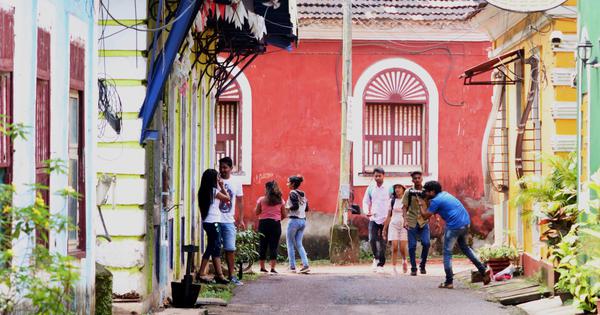 It’s barely 8am on weekdays, but the alleys of Panjim’s historic neighborhoods – São Tomé and Fontainhas – are buzzing with activity. The narrow streets of the “Latin Quarter” are full of tourists accompanied by a procession of photographers and their assistants. Couples in formal dresses and suits pose against a bright doorway, gazing lovingly at each other as the photographer shouts instructions from across the street: “Look here! Look for! Smile!”

Lower down, a couple cavort in the middle of the road as the photographer zooms in and out, capturing a wide range of angles. One assistant holds a reflector while another asks passing vehicles to wait a minute until the perfect shot is captured.

This scene replays endlessly, at any time of the day, throughout the year. Nothing is sacred, not even the facades of the churches and chapels that dot the district. Unable to bear the incessant screams and stares through their windows, residents of this neighborhood now keep their windows and doors tightly closed. Most suffer in silence, unwilling to face aggressive tourists on a daily basis. Others, however, are not giving in yet.

Some residents and businesses now post “No Photography or Videography” signs on their homes and establishments. Not only are many tourists unaware of this, but they pose next to the signs with cheerful smiles. It’s this blatant disrespect for residents’ demands for privacy and arguments that “a street is a public good” that infuriates the owners who are fed up with it.

Pereira is a veteran of the tourism industry and has seen the character of the neighborhood change dramatically in recent years. “When it started we said, ok, let them click on the pictures, they’re harmless,” he said. “Then over time we saw them put their feet up against the wall. Then they started shouting, shouting and dancing in the street. I ask them, is this your playground?

Pereira holds professional photographers responsible for the situation. “They are the prime culprits promoting this ‘colorful street’ and they are profiting at someone else’s expense,” he said. “It is not fair.”

Like many locals here, Pereira and her family have had several confrontations with tourists and photographers. “They say they are on a public road and they have every right to take a picture of my house,” he said. “I tell them: ‘But you are bothering me! What about my private life? What about my sanity?

Residents report that photographers often ask clients to lie down or sit in the middle of the road, which obstructs traffic. Wedding sessions include bridesmaids, makeup artists and assistants. Traffic jams are commonplace, especially on weekends or public holidays.

Everyone is a photographer

The backdrop of brightly painted heritage houses in Goa has always attracted visitors. It is only in recent years, however, that the number of tourists and photographers has increased exponentially, much to the chagrin of locals.

With the advent of inexpensive smartphones and the explosion of photo-based social networks, everyone is a budding photographer or influencer. India now has over 400 million Instagram users and is adding new ones at the rate of 100 million every nine months. “Best Instagrammable Places in Goa” is a popular topic for many travel sites.

Rua 31 de Janeiro (January 31 road), which begins in São Tomé (near the Mermaid Garden) and ends at Fonte Phoenix in Mala-Fontainhas, is particularly popular with film crews. The historian Vasco Pinho, in his book Snapshots of Indo-Portuguese History III, says that the name of the street commemorates the revolt against the monarchy on January 31, 1891, in the city of Porto, in northern Portugal. This eventually led to the creation of the Portuguese Republic in 1910.

Other sections of São Tomé and Fontainhas neighborhoods, the oldest in Goa’s capital, also have distinct personalities that are much more than their facades. Although now viral, these “colored streets” have a history spanning centuries and continents.

For most visitors, however, everything in the area is “hashtag Fontainhas”, erasing São Tomé’s identity and history, much to the chagrin of locals.

“There is absolutely no privacy,” said a São Tomé resident who did not wish to be identified. “Although we have doors, tourists enter our homes as if they own the place.”

This sentiment is shared by many locals. Tourists make themselves comfortable at the entrances to houses, sit on the stairs to eat, drink or make loud phone calls. They ring the doorbell at all hours to ask if there are rooms to rent, if they can see the house or if they can use the toilets.

“It’s not just the tourists outside our doors that are the problem,” said a resident of Fontainhas. “They click pictures of us on our porch, send drones into our bedrooms, enter our gardens and pose among our potted plants, often breaking them.”

Tourists are only here for photos, she said: “They don’t read about the area, they don’t care about the history or the architecture of the place.”

Nor are they concerned about the residents being sick, elderly or disturbed. She said the couples can often be heard fighting as some tourists run into residents’ cars while backing into the narrow lanes. “It has become so serious that we are considering leaving the area,” she said.

Damage to person and property

In old Panjim, nuisance goes beyond noise. A resident said their newly painted walls had been soiled by tourists putting their feet up. “Some even climb on the windowsill and sit down to pose,” says the resident. Recently part of their new wall covering was broken off after a tourist leaned on it.

“We put flower pots to protect our walls but tourists move them again and again,” said one resident.

It’s not just walls and property that are at risk. The neighborhood begins to feel insecure, the inhabitants complain. A few days ago, vigilant neighbors chased away someone who was trying to break into a house at 3 a.m.

Last month, a teacher named Josefa Pinto was attacked outside her home in São Tomé.

“Tourism is changing the culture of Goa,” said Gustavo Pinto, a prominent veterinarian and Josefa’s husband. “We see it in the food that is served in restaurants, in the music that we hear. Little remains of the Goa we grew up in.

The Pinto family have spent decades in the area but have now moved to another apartment. “People entered our house ‘by mistake’, which is scary for us and our daughters,” said Josefa Pinto.

The cost of invasive tourism

Closer to the Mandovi River, locals like me are besieged by the casino industry which operates from ships that dock at the pier. Our homes are surrounded 24/7 by vehicles belonging to casino drivers, employees and patrons. Their vehicles occupy every available space, often carelessly double-parked, preventing others from leaving.

Over the past 13 years, residents have called the police numerous times at 3 a.m. or 4 a.m. to complain about rowdy casino employees coming off their shifts and hosting impromptu roadside parties. Their cars are filled with alcohol and food wrapped in aluminum foil bags. Broken bottles and trash are regularly found outside many homes.

Vans full of casino gamblers pull up on the road, disgorging the men who strip into their underwear and put on their “casino clothes”. Vehicles often carry gas cylinders to enable roadside cooking, although this is prohibited in Goa. We spent a lot of energy being vigilant, protesting, chasing drunks or cleaning up after them.

Such invasive tourism is an act of appropriation. Tourists looking for the “European vibe” of Goa would not dare to behave like this abroad. In an unfenced residential area, the boundary between public and private is fine. There seems to be no legal basis to prevent someone from taking a photo of your home, but as one resident said, “We have the right to privacy and control over where photos of our house appear.”

Photos of homes (often with many residents clearly visible) are shared on social media with little regard for how it might affect privacy or security. On Instagram, residents can be seen sitting on their porches, praying, framed in their windows, unaware that their presumption of privacy has been breached by a long lens or a drone. With a significant number of older people in the neighborhood living alone, concerns about the changing nature of the place have become more pressing.

In 2021, Goa welcomed over three million tourists, down from its pre-pandemic peak of almost eight million in 2019. As the pandemic recedes, the footsteps will only increase. Residents of this section of Panhim are already dreading the upcoming holiday season.

Listen, I understand. On vacation, everyone wants photos with a stunning backdrop, especially the one that all the cool kids share. So what can ambitious visitors do to reduce the frustration and hostility of local residents?

First, respect a direct request. If someone has signs all over their house asking you not to take pictures or videos, move on. Keep the noise level to a minimum and feet away from the walls.

Remember and remind others that it’s not just your Insta backgrounds, but there are people who live behind those walls. These people have the right to peace and quiet, rest and life without you sending a drone or looking out of their windows. Bring your litter box. Leave potted plants alone – a stolen cutting is a cursed memory.

Perhaps put that camera down for a second and admire the colors and graceful lines of the houses. Think of the history the place has seen and hope that when you return – you know you will – these homes will still be standing in all their glory.

Chryselle D’Silva Dias is a freelance journalist living in Goa.