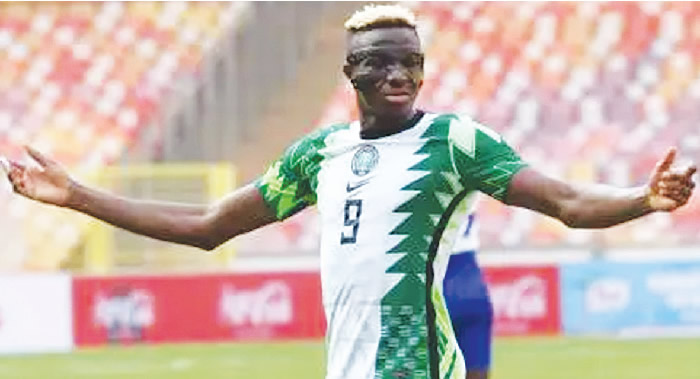 Super Eagles and Napoli striker Victor Osimhen has said he believes he has the quality to match and even surpass legendary Nigeria striker, Rashidi Yekini’s goalscoring record.

Yekini, who represented the country for 14 years, scored 37 goals for the Eagles in 62 appearances to remain the country’s top scorer, while Osimhen has 15 goals in 23 appearances.

He was also part of the squad that took part in the 1994 World Cup, where he scored Nigeria’s first-ever goal in football’s greatest showdown in a 3-0 win over Bulgaria.

Known for his goalscoring prowess, Yekini helped the Eagles win the 1994 Africa Cup of Nations in Tunisia as the tournament’s top scorer with five goals and was named the competition’s best player.

Since retiring in 1998, no Eagles striker has been able to equal the late Yekini’s goalscoring record, with AFCON 1980 winner Segun Odegbami a distant second with 23 goals, while former Everton striker Yakubu Aiyegbeni is third with 21 goals.

Despite being 22 goals clear of former Abiola Babes striker Osimhen, whose four goals against São Tomé and Principé last month saw him occupy 10th position on the country’s top scorers list , said he was confident that with hard work he could overtake Yékini.

“I used to say it would be a big shoe to fill, but with the kind of quality I have and the kind of determination I’ve acquired in my career, I think I can actually break it or even top it,” Osimhen told Naijafootballers.

“But it won’t be easy and it won’t make me the greatest Nigerian striker of all time. For me, we still have people like Rashidi Yekini, Odion Ighalo, Obafemi Martins and others, but now I believe it’s my time and it’s my turn and I think I can use it very well.

On his ability to score with his head, the Napoli striker added: “I practiced a lot growing up. Those who know me know that I use my head to score more goals than I use my feet and the mask also gives me the confidence to go into any duel and score headers, I think I will continue to improve as I continue to use my header.