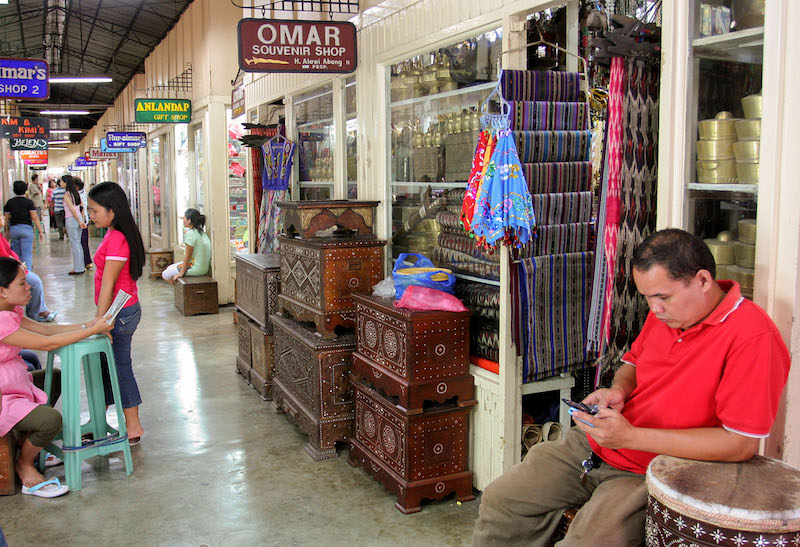 DAVAO CITY (MindaNews/January 22) – Dabawenyos expressed sadness when the management of the Aldevinco shopping center announced that it had closed on December 31, 2021, many of them sharing nostalgic memories of the popular tourist landmark, home to various souvenir shops for almost six decades.

While others say Aldevinco wasn’t exactly closing as tenants would simply be relocated to a new location, Poblacion Market Central, Mindanawon filmmaker Jay Rosas told MindaNews that the demolition of the 56-year-old mall to open the way to the so-called “cosmopolitan goals” gives the impression that part of old Davao is being removed.

Aldevinco, he explained, was not just any mall but a “cultural identifier” and, at the same time, a familiar landmark from his childhood.

Rosas said he couldn’t help but be nostalgic for the closure of Aldevinco, with the old, unsophisticated mall forever etched in his memory as his favorite place to either look for costumes to wear for school presentations, or to buy foreign currency for his trips abroad.

“Aldevinco is not a mall but it’s mostly souvenirs, not trendy brands, a tourist landmark, a place name you would think of when a first tourist in Davao asks where to buy pasalubong or unique things,” he added.

He said Aldevinco had been part of his childhood and, like any other Dabawenyo, he had a good share of fond memories growing up with which children belonging to “Gen Z” who expressed indifference to the closure of ‘Aldevinco couldn’t resonate.

“In college, there is a small restaurant in the back where I ate lomi or bring it back to the office where I work at Ateneo as an errand,” he said.

Rosas said he would miss Aldevinco, a mall devoid of all the commercial appeal of a bustling cosmopolitan city that once stood in the heart of downtown Davao.

“To some it may just be a base and nothing more than a waiting place for jeepney rides, that tearing it down for a high rise condo would be cosmopolitan goals…J I just feel like we’re buying into the genre of skyscraper development that we’ve been told fits everything,” he said.

Former Davao City journalist Boom Castillo, a graduate in mass communication from Ateneo de Davao University, said she was saddened by the closure of Aldevinco.

“College life wouldn’t be complete” without crossing to Aldevinco from the Roxas Avenue entrance to the university. Aldevinco is at the corner of Claro M. Rector and Roxas Avenue. Across Recto is the Marco Polo Hotel which was among the first victims of the COVID-19 pandemic. The hotel closed mid-June 2020.

Aldevinco Mall, a premier arts and crafts destination in Mindanawon from local property developer Alcantrara and Sons Development and Investment Corporation (Alsons Dev), closed on December 31, 2021, but its tenants have been relocated to the Poblacion Central market along Bangoy Street where the Madrazo fruit stand once stood, about a block from Aldevinco.

“I understand that the public is more focused on the kasi nga naman Aldevinco shutdown being a Davao landmark, but the last thing we want people to think is that Aldevinco is totally gone. The brand will live on its Poblacion. It’s just a change of address, to better and improved facilities,” said Margarita Rey-Gross, Director of Marketing.

Some tenants of Aldevinco and other local stores have been operating in Poblacion since December “but in a settled bazaar for now while their stores are being refurbished.”

“We’re looking at opening in March,” she said, adding that the renovations would likely be complete by then.

Gross said the company’s initial plans for the Aldevinco property had been pushed back due to the pandemic, but added that the replanning was still ongoing.

“We had initial plans for the Aldevinco property but are currently reviewing everything given the pandemic,” she said.

Studies for the property are still ongoing, she said.

Over the 50and anniversary of the Aldevinco shopping center at the SMX Convention Center Davao in 2015, Tomas I. Alcantara, then president of the Alcantara Group, told reporters that the Aldevinco property could accommodate vertical expansion that could include condominium and office space as “we look forward to transforming Aldevinco Shopping Center into a structure that will complement the growing new cityscape that surrounds it.”

“Over the years, we have been able to accommodate an increasing number of tourists who come every year. The tourists are there and they have made Aldevinco a necessary stopover before returning home. In some way, we are able to contribute to making Davao a destination and we hope that we will continue to fulfill this function, however small, in the years to come,” he said.

The Alsons Group, one of the largest and most diversified Philippine conglomerates in the country, has interests in agriculture, aquaculture, mining, real estate and power generation

The company said Poblacion Market Central is a celebration of the city’s up-and-coming arts, business and food scene.

“In addition to your favorite Aldevinco stores, the new retail development will also include more retail brands, a food hall and essential service establishments,” Alsons said in a recent press release.

He said the Poblacion debuted by hosting Mindanao Art 2021, the biggest celebration of creativity featuring the works of more than 300 artists from across the region, which drew thousands of art lovers to last October.

“Through the exhibition, we have created citywide appreciation and expanded cultural awareness while putting food on artists’ tables,” said the Mindanawon artist and President of Lawig Diwa Inc. ., Kublai Millan.

Poblacion Market Central reopened its doors last December to host its first-ever Christmas event titled “Pasko sa Poblacion,” where a curated mix of some of Davao’s best art, retail, and food brands were invited to set up pop-up shops while giving local artists, artisans, and entrepreneurs the opportunity to showcase their works and their products.

Regional Tourism Director Tanya Rabat-Tan said Aldevinco was the favorite spot for tourists and residents alike for souvenirs. “It is indeed sad to see it go out of business as it has played an important role in the history of the city as an iconic destination, much loved by tourists and locals alike.”

But looking on the bright side, she said, Aldevinco tenants are moving to a “better location” in Poblacion Market Central, “with more rental space that can accommodate more local brands, more merchants of local food and beverages and other allied products and services..” (Antonio L. Colina IV/MindaNews)

Damage to roads in the Azores exceeds 10 million euros