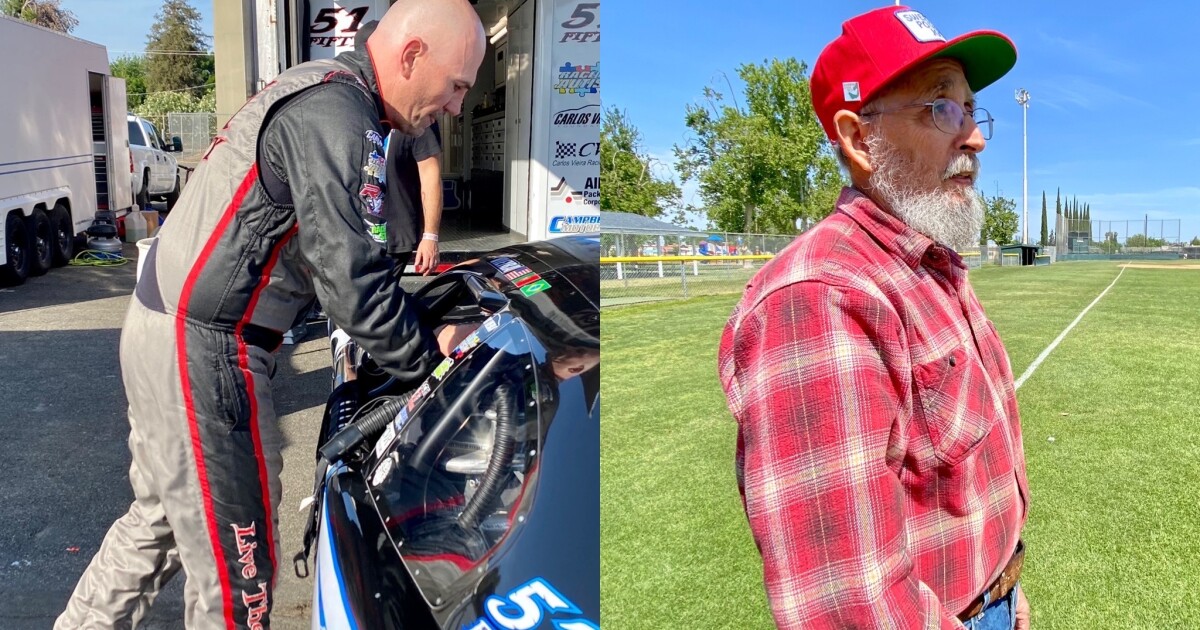 This story is featured on the Livingston episode of The Other California, KVPR’s podcast about small towns in the San Joaquin Valley.

The smell of exhaust fumes dominates the air as race car drivers race down the track in waves. Dozens more are ensconced in their stations, supply teams close at hand. They are all training for tomorrow’s race.

I’m at Madera Speedway on a Friday afternoon to meet Carlos Vieira. He’s a sweet potato farmer from Livingston, but driving is his passion.

Outside his racing trailer, he sits relaxed on a folding chair. Soon he will get dressed and jump in his racing car. This is his 15th year on the track.

“When I started I was like, ‘Okay, stay on the gas pedal as much as you can around the corner and that’s the quickest way to get around the track. .’ But you quickly learn that there is such finesse when it comes to racing,” he says.

Carlos has always lived a fast life, sometimes to his detriment. He actually embarked on the race to refocus after years of battling drug addiction.

But being a sweet potato farmer also grounded him. Carlos is one of three children born to Portuguese parents. Her father was from the Azores. Manuel Vieira moved to the United States to work for his uncle, Antonio Vieira Tomas, who operated a small sweet potato farm called AV Thomas in Merced County.

In 1977, Carlos’ father bought the farm from his uncle and that started the family sweet potato business. Carlos helped his father throughout high school.

“We slowly started to build the business to the point where we are now the largest grower, packer and seller of sweet potatoes in the country,” he says.

Carlos now runs AV Thomas. The business provided him with many opportunities, including auto racing, which he says saved his life and gave him purpose. “I’m still very passionate about what I do, but I needed to do more than just grow, pack and sell sweet potatoes. So the race was a great outlet for my energy.

And it was through his shopping that he started helping others. Shortly after his first race at Madera Speedway, Carlos says he was approached to help with a fundraising campaign for Valley Children’s Hospital. He therefore created a non-profit association, the Carlos Vieira Foundation.

Today, the foundation raises money for autism, mental health, and after-school boxing programs, as well as a series of scholarships. It has been a good complement to his day job running the sweet potato business.

Like Carlos, Jim Alvernaz is also a sweet potato grower in Livingston and the son of an early sweet potato grower. And while Carlos loves fast cars, Jim loves calling sports, baseball in particular, and it’s all because of his dad, whose name is on the town baseball field.

I meet Jim at Livingston Memorial Park where volunteers are trimming the shrubbery near the Joe F. Alvernaz field. “I can’t believe how good this course is, it’s like a green,” Jim said as he walked onto the course.

We walk around the vast open terrain and talk about Jim’s family. His grandfather came from the Azores in the early 1900s. Jim’s father Joe died in 2013, but during his lifetime he was widely known as “Sweet Potato Joe”.

Jim says his father was a World War II veteran and returned from the war to continue serving his community. He was civic-minded, Jim says, and had a particular interest in baseball, organizing little league and announcing games.

He is not buried here but there is a metal cutout in right field that features a photo of Joe Alvernaz, smiling in his military uniform, one foot resting on a can of sweet potatoes.

“Since it’s here almost every day, if I come into town, I walk around the stadium and say hello,” he laughs. “I say ‘hey dad.'”

Every year, Jim announces a special game held in honor of his father, the proceeds of which will be donated to Livingston Youth Baseball. There’s even a baseball cap made for the game. “The Sweet Potato Joe hat you can see I’m wearing,” he said, pointing to the hat.

The bright red cap and green beak underneath are hard to miss. A large white crest stands out on the front: Sweet Potato Joe – the hat, the field and the games reminiscent of his father’s spirit and his love for baseball.

Latest headlines from Yorkshire on May 25: Texas school shooting, war in Ukraine and weather