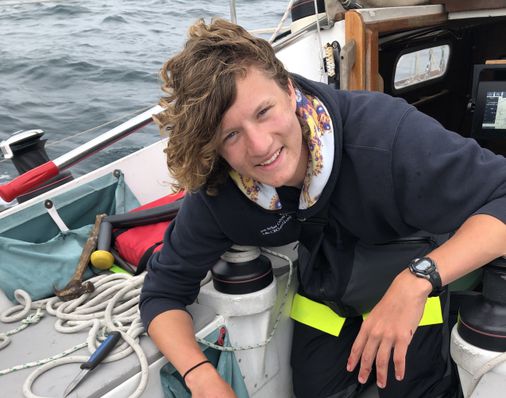 Currier lives in California but spends each summer in Duxbury, where his family owns a cabin, and Marion, where his grandfather lives.

Currier began taking sailing lessons at a yacht club in San Francisco, but he kept quiet about his lofty goal. He didn’t want to talk to people about the trip he was planning in case something went wrong and it didn’t work out.

While shopping online for a boat to buy, he found the Argo, a 30-foot tartan monohull sailboat built in 1976. With his own money (which he earned through a camp summer he started with his three brothers and getting sponsorships), he bought the sailboat for $12,000 from Sandy Van Zandt, a legendary sailmaker who lives in Connecticut.

Currier said he was honored to take ownership of Van Zandt’s sailboat. He said Van Zandt had worked on the boat for years and had planned to take it solo to Bermuda.

“He passed the boat, this dream, this legacy on me,” he said. “A person sailing in open water – that’s what he designed the boat for.”

Currier may be new to sailing, but it runs in Currier’s blood. His father, James Currier, 54, grew up on racing dinghies, then sailed across the Atlantic and Pacific in his twenties; his maternal grandfather, Bill Saltonstall, who lives in Marion and was co-founder of the Buzzards Bay Regatta, crossed the Atlantic twice; and his paternal great-grandfather, the late Stephen Currier, built a wooden boat and sailed to the Galapagos in 1948.

Currier said single-handed sailing is like an endurance sport.

“It’s like running a marathon,” he said, “but instead of feeling physical pain, it’s mental pain.”

It’s lonely out there in the open sea. Time can seem to pass slowly and the constant movement of the boat makes her feel a little seasick.

But on top of that, he’s enjoyed the trip so far. He lives on lots of freeze-dried foods – eggs, chicken, mashed potatoes, spaghetti – because the meals are easy to prepare.

Currier said the weather was much better than he expected.

“I had good weather,” he said. “There was only one night of rain and nastiness, it was my first night.”

Everything has been fine since.

“It’s been quite dreamy,” he said. “It’s been pretty amazing.”

As he approached the Azores on Friday, he saw turtles, dolphins and whales in the water. Until then, all he had seen was jellyfish – lots of jellyfish.

After landing in the Azores, he will stay there for a few days and then head to Portugal. If all goes as planned, he should arrive in Spain at the beginning of August. “It’s hope,” he said.

His father, James Currier, believes he may be the youngest person to have crossed the Atlantic solo from west to east, unassisted, without a chase boat.

He said he offered to accompany his son on the trip, but Cal wanted to do it himself.

“So many people say, you can’t do this, you’re too young, too inexperienced,” her father said. “Why can’t a 16-year-old kid do that? »

A map showing Currier’s progress and the current location of his sailboat can be viewed online at https://share.garmin.com/FFAKP.