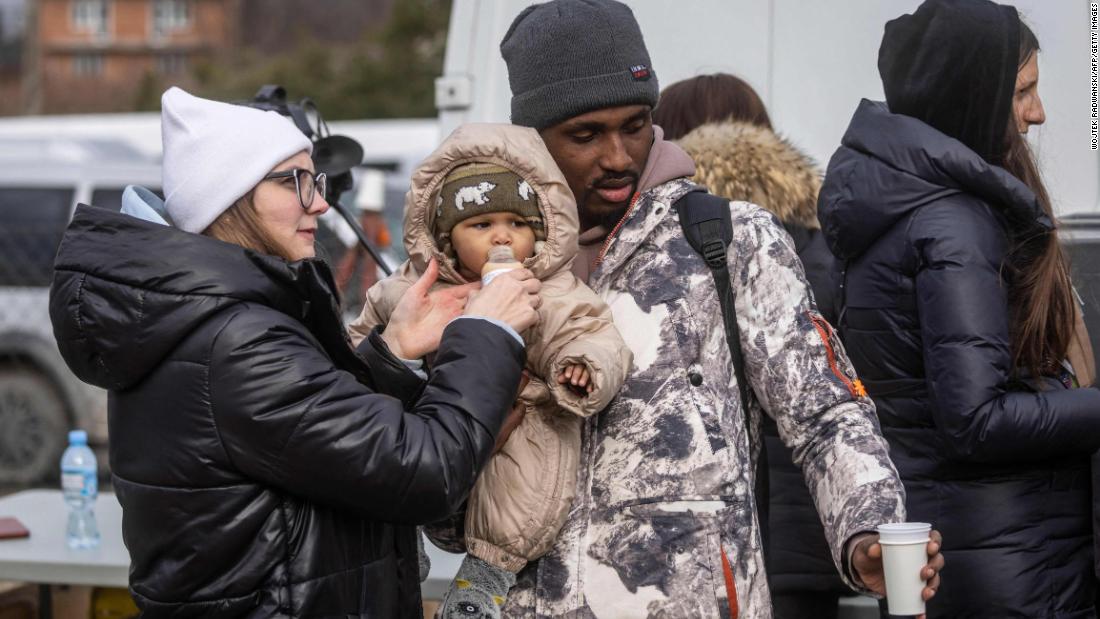 Opinion: I am a black and African woman. It’s time to change the channel on Ukrainian media coverage

It wasn’t so much what he was saying, it was more what was implied; that not all lives have the same value. And this idea – the belief that some races are superior to others – is a fundamental tenet of racism. It is alarming to me that Sakvarelidze was not challenged during his interview.

As a black and African woman without blue eyes or blonde hair, it was equally moving to see the number of racist and ignorant comments in coverage of Ukraine that went unchallenged by interviewers and media platforms. who released them. CBS, Aljazeera, BFM TV and ITV in France have all reported the invasion in a way that illustrates a deep-seated bias informed by a belief system that screams of an old-world, white-led order.
ITV News correspondent Lucy Watson on the ITV report at the studio summed up the collective hypocrisy and underlying narrative that the Ukrainian war has exposed when she said: “The unthinkable has happened… it’s not a third world developing nation, it’s Europe!”

According to the narrative she believes, “unthinkable things” only happen in “third world countries” (now an obsolete and derogatory term, someone should tell her), and that narrative is perpetuated by the type of stories she, and many like her, have heard about the continent.

In Africa, these are the stories of conflict in Ethiopia, insurgency in Mozambique, electoral violence in Uganda and recent coups in Mali, Chad, Guinea, Sudan, Burkina Faso and Guinea Bissau. But it’s clear that far too many people don’t pay attention to them because the people in these stories aren’t rich or from the North.

This is why the “unthinkable things” that happen in places like Africa are usually reported in terms of issues, numbers and trends, rather than people, emotions and lives. destroyed. In Africa, our stories tend to offer simplistic analysis that lacks context and nuance, and prioritizes headline-grabbing proclamations, such as that of UN Secretary-General Antonio Guterres about a “an epidemic of coups d’etat” in response to six coups in five of Africa’s 54 countries over an 18-month period.

These examples have shown us that the global media are complicit in perpetuating racist narratives, by failing to encourage diversity in their newsrooms and by giving an unlimited platform to influential journalists and spokespersons with implicit biases. which are not disputed. But rather than dwell on that, I want to share some of the facts that should make us all rethink the traditional, stereotypical ways of dismissing non-white, non-rich countries and their people.

The traditional world order is undergoing a sea change, driven by Covid-19, China, Russia and movements like #MeToo and #BlackLivesMatter. The new world order offers the world an opportunity to rethink what little it knows about the rest of the world.

By 2050, Nigeria will overtake the United States as the third most populous country in the world with a population of 400 million. That’s reason enough to be careful. Africa’s population is growing rapidly and experts predict it will account for half of the world’s population growth in the next two decades.
This means that more than a quarter of the world’s population will be on one continent, Africa. The thought that the world will be taken over by Africans (no blue eyes or blond hair here) will be an uncomfortable idea for some people, especially if they are almost ignorant 125,000 millionaires, 6,200 multimillionaires, 275 centimillionaires and 22 billionaires that exist on the continent today.
Indeed, a report by the University of Southern California in 2019, highlighted how poorly represented Africa is in the United States. He also revealed that Americans rarely see mentions of Africa or Africans on TV entertainment shows or in the news.

When they do, the representations are often negative and stereotyped. According to the report, most mentions of Africa (43%) appeared in national or local news and tended to be “hard” reporting that often fueled the stereotype. After politics (32%), crime received the most mentions (16%), while business and economics accounted for only 8% of media coverage.

Over 60 research articles, reports, books, academic journals that we have analyzed since the year 2000 written about Africa in the media have told us that poverty, conflict, corruption, disease and lack of leadership were the five frames through which most stories about Africa are told.

This persistent portrayal of a single story is why over the years Africans have fought back with hashtags like #TheAfricaTheMediaNeverShowsYou and #SomeoneTellCNN on a 2015 CNN report describing Kenya as a “hotbed of terror”, for which it was later amended. And organizations like Africa without filter, which aimed to change stereotypical narratives about Africa, were created. This is why the Twittersphere erupted recently when a journalist Alan MacLeod collected his greatest hits of racist coverage of the invasion of Ukraine — thank you, Alan!
Contrary to what negative media portrayals might have you believe, Africa actually has some of the fastest growing economies in the world. For example, for most countries in the world, Rwanda is synonymous with its 1994 genocide. But with an average Expected GDP growth of 6.7 between 2021-2025, it is in the top five fastest growing economies alongside India. Rwanda has been able to attract foreign direct investment and is one of the easiest places to do business in Africa (after Mauritius) according to World Bank Index. This means that Rwanda and countries like Seychelles, Mauritius, Ivory Coast, Ghana and Kenya deserve to be considered as potential destinations for investment, not just development dollars.

Don’t ignore the data that shows that there are over 400 companies with annual revenues of $1 billion or more in Africa, or that the second fastest growing tourism market in the world is right here in Africa.

It’s also unlikely that many northerners would know about any of this, as it doesn’t fit the narrative, both were fed about non-white “third world countries”.

the fastest growing The developer community and tech start-up ecosystem in the world is in Africa. Kenya, Nigeria, South Africa and Tanzania are ranked in the top 20 Global Crypto Adoption Index. This means that they have some of the highest cryptocurrency popular adoptions in the world. In fact, Kenya was ranked first in the world when it comes to peer-to-peer cryptocurrency transactions. Given all this digital activity, it is hardly surprising that Africa is one of the fastest growing markets in terms of venture capital and fintech activities.
Africa is also considered the second fastest growing and most profitable global payments and banking market after Latin America. this McKinsey study.
The reality is that much of what is happening in Africa today is unexpected. For example, six countries; Namibia, Cape Verde, Ghana, South Africa, Burkina Faso and Botswana have a Press Freedom Index better score than the United States, according to Reporters Without Borders.

But that doesn’t fit the lingering image of a broken continent where nothing works and its sad, dependent peoples lack the agency to change things. The truth is that there is a vibrant new energy and entrepreneurial spirit on the continent, a story that is largely untold, and one that is evidenced by the low regard with which those in the Global North hold us.

It is a hidden story because its heroes are neither white nor from “up there”. But the way the world is changing, that won’t matter much anymore. Everyone, including the media covering the Ukraine invasion, should pay attention.

The Algarve-Seville rail link still on the agenda