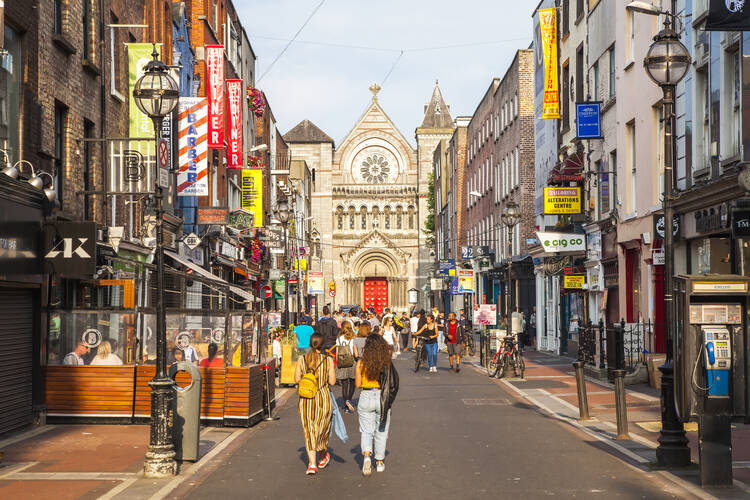 “Ouch!” You will say this more than once reading Fintan O’Toole We do not know each other. American readers familiar with O’Toole from his reviews in The New York Review of Books or his work as a drama critic may not know that the Irish writer is also a polemicist. He turns the knife on an impressive array of people, political and social institutions and cultural flavors in the over 600 pages of this “personal history” of Ireland from the year of his birth (1958) to These days.

“My life is too boring for a memoir and there is no shortage of modern Irish history,” he wrote. “But it so happens that my life, in some ways, both spans and reflects a period of transformation.” Accordingly, O’Toole brackets his material to focus on events that occurred during his lifetime; this approach means he can season each analysis with personal memories and reactions, making for a much more vivid story than most.

This notion of a personal narrative also gives his arguments a sort of Teflon coating: the few times I found myself pushing back his description or analysis, I was confronted with the fact that he was an author Irishman writing a personal story of his experience. from Ireland. There’s not a lot of room for rhetoric to respond with “Actually, that’s not true”. And is there a more heinous cliché than that of the Irish-American weighing in on the old grass?

O’Toole turns the knife on an impressive array of people, political and social institutions, and cultural flavors in the more than 600 pages of We do not know each other.

The Ireland of O’Toole’s childhood had not changed much in the four decades before he was born, partly because the main driver of change – young people – were emigrating in large numbers each year. As a result, the Ireland of 1958 was “almost suffocatingly coherent and fixed: Catholic, nationalist, rural”, he writes. But at the same time, “Ireland as a lived experience was incoherent and not fixed”, because there was a second, less visible reality:

Early Ireland was bounded, protected, free from the unhealthy influence of the outside world. The second was limitless, moving, physically moving towards this outside world. In the space between these two Irelands there was a haunting emptiness, a sense of something so unreal it could vanish altogether.

And indeed, the Republic’s population bottomed out at 2.8 million three years after O’Toole was born; more than a century earlier, it had peaked at 6.5 million. Three in five Irish children raised in the 1950s were destined to leave at some point in their lives, a “slow and relentless demographic disaster” that made the nation seemingly impervious to change.

And yet, today, Ireland is a modern state, apparently well integrated culturally and economically with Western Europe. The population of the Republic exceeds five million and, in terms of gross domestic product, Ireland is one of the wealthiest nations in the world. By nearly every financial marker, Ireland today bears little resemblance to the poor, rural, traditional nation of half a century ago. “It was the big gamble of 1958,” writes O’Toole, where “everything would change economically but everything would stay the same culturally.”

The reality turned out to be somewhat different, as economic growth brought more than just financial changes. Politically and culturally, Ireland has always operated as an alliance between church and state, and the Catholic Church has wielded enormous influence over education, health care, politics and even the legal oversight of minor defects. The Archbishop of Dublin, O’Toole notes, was not shy about calling local radio stations and ordering songs he considered too risque to be banned.

The arrival of the mass media has made the situation almost comical. How should Church and State respond to uphold the traditional morality of the Irish people? Cut out all the sexy pieces of “Casablanca”? Trying to jam the signals of the British Broadcasting Corporation? Insult against the corrupting influence of the European media, to end up with a whole generation of children obsessed with American westerns? (These had already been suitably arranged by Hollywood according to the Hays Code, largely written by – you guessed it – Irish-Americans.)

The deference long accorded to priests and men and women religious by civil society also began to wane in the 1960s and 1970s as the Church increasingly showed its feet of clay. Like many Irish children, O’Toole was educated in high school by the Irish Christian Brothers, and his accounts of their brutality match many other equally grim tales. It was the cane or the leather thong that schoolboys dreaded; it wasn’t long before stories of sexual abuse also became widely known (and O’Toole is quick to note that physical abuse and sexual abuse often go hand in hand).

O’Toole reserves a special circle of hell for any type of ecclesiastical authority, and his treatment of the Christian Brethren goes well beyond a “personal history,” a curious moment in the book where his testimony seems to contradict his about. He quotes Éamon de Valera, a hero of the 1916 Easter Rising and Ireland’s most prominent politician for decades: “I am a fellow who owes practically everything to the Christian Brethren. He quotes Charles Haughey, another prominent Irish politician: “What the Brethren do is lay the foundations for virtually every aspect of life.” But none of the quotes – or a number of others – are used to show the good that the Christian Brethren wanted or accomplished; rather, they are, for O’Toole, proof of the horror of violence. Only a man beaten into submission, we are supposed to conclude, would be so unable to articulate what had been done to him.

In any case, whatever iron fist the Christian Brethren or any other religious order had over their students has become a thing of the past in Ireland. Once it became clear that sexual abuse (along with other horrors like the Magdalen laundries and the mistreatment of so many other vulnerable adults) had occurred in many Church-State hybrid institutions , the Irish were even quicker than many other modern societies to shrug their shoulders. shoulders and say goodbye to traditional religious adherence.

O’Toole even finds a taxi driver who has bought a vacation apartment in Cape Verde, a country he has never visited and cannot find on a map. “A good investment,” he says.

A rather different gospel took hold in the 1990s and 2000s, as the Celtic Tiger economic boom promised prosperity, a more cosmopolitan worldview, and integration into the global economy. O’Toole even finds a taxi driver – all good journalists know how to interview the taxi driver – who has bought a vacation apartment in Cape Verde, a country he has never visited and cannot find on a map. “A good investment,” he says.

“Ireland has become a full-scale version of a makeover TV show,” O’Toole writes, “with the ‘before’ images showing a scruffy, depressed wretch and the ‘after’ images of a smiling, blinged-out beauty. bling, who went on to start his own self-improvement course for equally despicable little countries. And the new gospel did not tolerate dissent: “To state the obvious was to be a heretic.”

When the global economic crisis of 2008 once again relegated Ireland to the ranks of European charity cases, writes O’Toole, the Irish were oddly accepting their fate: was a drama that could be fashioned as a medieval morality play. This drama consisted of three acts: sin, punishment and redemption.

“In 1958, and for many decades after, there was this feeling that, unless she claimed to know herself thoroughly and absolutely, Ireland would not exist at all.”

Today, Ireland has largely recovered economically from this crash. And while the culture may superficially resemble that of 1958, it has changed dramatically. In the past decade alone, public referendums have legalized abortion and same-sex marriage; Mass attendance and religious vocations are both down sharply; immigration (to Ireland, not from it) is a growing reality, especially in the megalopolis that is today Dublin. In 2017, Ireland became the fourth country in the world to have an openly gay head of state.

Even the seemingly intractable political quagmire of violence and revenge represented by the Troubles seemed to have an end in sight with the adoption in 1998 of the Good Friday Agreement between the British and Irish governments, along with most political parties of Northern Ireland, on the political future of Northern Ireland.

“In 1958, and for many decades after, there was this feeling that, unless she claimed to know herself completely and absolutely, Ireland would not exist at all,” O’Toole writes in the last pages of the book. . “Ireland didn’t start as one fixed thing and end as another. It moved between different kinds of infixity. And it’s O’Toole’s analysis of the peace accords that captures best this change in Ireland during his lifetime.

When the Irish Republican Army agreed to sit down at the negotiating table without insisting on the reunification of the 32 counties as an absolute requirement – never the sine qua non of IRA politics – the group’s leaders tacitly admitted that the rallying cry of three generations of freedom fighters was no longer seen as a realistic possibility. But the people of the Republic, O’Toole notes, “more or less accepted it.” These days, you’re more likely to find an Irish-American singing the old rebel songs than the Irish themselves. Why?

“Certainty was what you killed and died for,” O’Toole writes. “Doubt was what you could live with.” From economics and religion to social change and cultural effervescence, this formulation could be as succinct a description as any journey from Ireland to the present day.