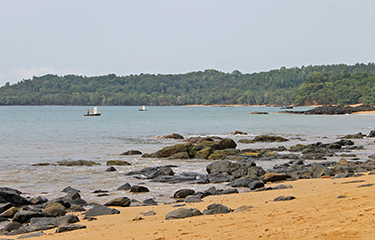 The African island nation of São Tomé and Príncipe has announced a new resolution to join the Fisheries Transparency Initiative (FiTI).

The country – whose population depends on fish as its main source of protein – is now the sixth country committed to increasing the transparency of its fisheries management thanks to the FiTI standard, after Mauritania, Seychelles, Senegal, Cape Verde and Madagascar, according to a statement. by FITI.

Sao Tome and Principe Agriculture, Fisheries and Rural Development Minister Francisco Martins dos Ramos said his country “recognized early on that its precious fisheries resources were being exploited beyond sustainable levels, by domestic and foreign fleets. , and in a non-transparent and non-inclusive manner”.

“Therefore, we seek to create mechanisms to reverse this trend and help regenerate the exploitation of fisheries resources through the development of a sustainable fisheries management system based on fisheries research, fisheries administration and a system inspection,” the minister said in a letter to FiTI. President of the International Council Valeria Merino.

With the country’s commitment to join the FiTI, the next phase will be to complete the steps required to submit an official application.

A first country mission of the FiTI International Secretariat is planned for February and March 2022.

The country has a capacity to catch around 29,000 metric tonnes of fish per year and, by committing to adhere to the FiTI standard, it has committed to start implementing transparency initiatives supported by the group. .

According to the FiTI, the standard “provides governments, the fishing industry and civil society with a comprehensive and credible means of achieving and maintaining high levels of transparency over the management of the marine fishing sector and the activities of fishermen and fishing enterprises”.

The fisheries of São Tomé and Príncipe are exclusively artisanal and largely focused on small pelagics. Through its involvement with the FiTI, the country also plans to engage stakeholders across the value chain to remain consistent with the objectives of the FiTI.

An earlier commitment from São Tomé and Príncipe to join the FiTI in 2018 was delayed after the country’s change of government in 2019. The process was relaunched in November 2020, with a commitment between the FiTI International Secretariat and key parties seafood stakeholders in the country – including government, business and civil society collaborators with support from MAR Ambiente e Pesca Artesanal (MARAPA) – a FiTI Global partner.

“With this commitment, the government of São Tomé and Príncipe is setting a milestone for transparency in the management of its marine fisheries,” said FiTI Global.