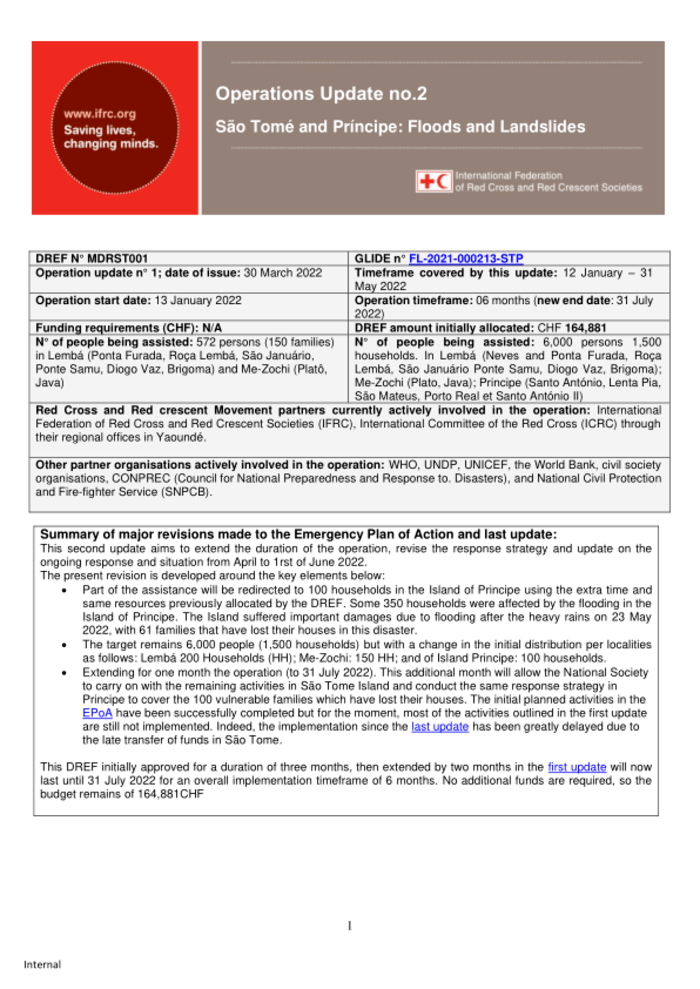 Summary of major revisions to the emergency action plan and latest update:

This second update aims to extend the duration of the operation, revise the response strategy and provide an update on the response and the ongoing situation from April to 1 June 2022.

This revision is developed around the following key elements:

This DREF initially approved for a period of three months, then extended by two months in the first update will now last until July 31, 2022 for an overall implementation period of 6 months. No additional funds are required, so the budget remains at CHF 164,881.

A. ANALYSIS OF THE SITUATION

Description of the disaster

The 2021 rainfall in São Tomé and Príncipe peaked between December 28 and 29, 2021, causing the country’s rivers to rise. In less than 24 hours, the rains that fell on the archipelago caused chaos in the capital and in several other regions of the country, especially in areas where streams flow and near rivers. The storm that hit the archipelago, including the island of São Tome, on December 28, 2021 left two people dead and at least six missing in the community of Ponte Samu. On December 30, 2021, the government of São Tomé declared a state of disaster due to the damage caused and appealed for international assistance during a meeting attended by international actors present in the country and ambassadors.

While NS was still responding to the floods in December, heavy rains hit the whole country, causing a new wave of floods on March 4, 2022, resulting in floods of varying severity in the northern and northwestern districts of Lembá , Me-Zochi and Agua Grande. Already exposed by the floods of December 2021, the districts of Lembá and Me-Zochi were strongly impacted. Lembá in particular being more vulnerable due to its socio-economic situation compared to other affected districts. The greatest damage from this second wave of flooding was recorded in the capital Neves. After a detailed assessment of the situation on March 22, 2022, the Red Cross of São Tomé and Príncipe (CVSTP) recorded injuries, numerous damages and material losses and began to help 150 additional families thanks to an additional fund granted by the DREF.

On May 23, 2022, the Autonomous Region of Principe experienced heavy rains that caused serious damage to the island. According to the assessment of the situation carried out by the SN in collaboration with the government, a significant number of houses have been flooded, with damaged furniture and appliances. Several plots of agricultural land collapsed and the flow of water carved out several roads. Many communities have been left with inaccessible roads due to rock erosion, such as Bela Vista, Abade and Aeroporto to Picão via Telelé so far, totaling 10 landslides/rockslides and 2 partially destroyed residences. Gas stations were out of service and the floods affected the municipalities of Santo António, Lenta Pia, São Mateus, Porto Real and Santo António II with a total of 61 residences and 350 families affected by the floods. The government of Príncipe proposed to the central government to declare a state of calamity on the island, declaring Principe as a humanitarian priority.

This new situation is the reason why the Red Cross of São Tomé and Príncipe wishes to review again the current functioning to be able to help the most vulnerable households of Principe.