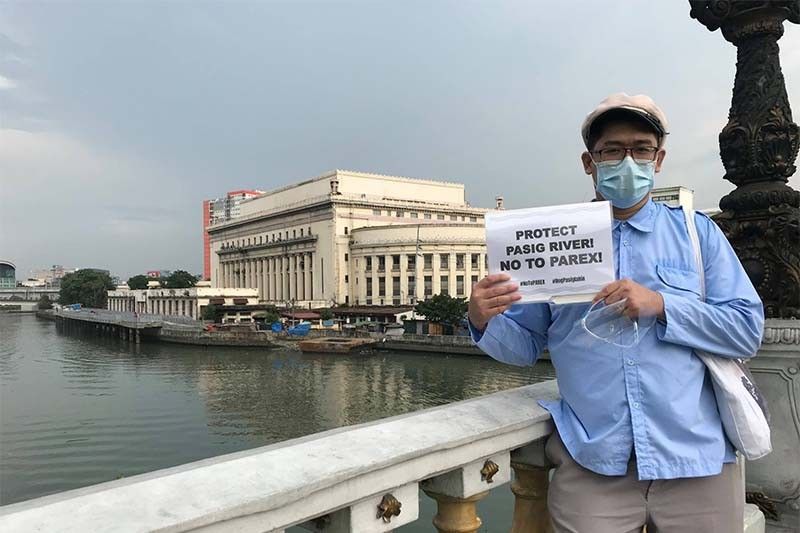 MANILA, Philippines – For a group of artists and heritage advocates, Pasig River is a “cradle of rich heritage within the metropolis.”

However, a six-lane elevated highway project called the Pasig River Expressway (PAREX) spanning 19.37 kilometers that is expected to rise above this precious river is expected to impact heritage structures.

What are the potential heritage assets at stake?

Renacimiento Manila had previously estimated that at least 40 important architectural treasures in a wide range of styles, including neoclassical, Art Deco and neo-renaissance structures, would be affected by this project. Some of these jewels are designed by renowned architects such as Tomas Mapua, Angel Nakpil, Juan Arellano, Jose Maria Zaragoza and Luis Maria Araneta.

Among the built heritage properties that would be affected by this project are dozens of other historic bridges still in existence, industrial heritage and heritage districts, as well as government offices located along the river banks.

These include the walled city of Intramuros MalacaÃ±ang Palace, among others. The group said the palace, now the official residence and workplace of the president’s office, is the former country home of Spaniard Luis Rocha who was involved in the galleon trade.

“This elevated highway will reshape the landscape and deprive the Tagalogs (taga-ilog) of their cultural identity which is a constitutional right,” Renacimiento Manila said in April.

“This could prevent future projects from making the river and its banks a dynamic tourist spot, an open public space, means of public transport that will improve the sustainable quality of life of Manilenos,” he added.

However, the PAREX project started on September 24, just days after the SMC and the Toll Regulatory Board signed the additional toll operating agreement for this purpose.

In view of this, concerned citizens, taxpayers and organizations who disagree with the construction have started an online petition calling on SMC to end the project.

“PAREX will erase our people’s link with the river which is the cradle of our country’s civilization and a heritage resource of national significance,” reads their joint statement and online petition.

â€œWe believe that PAREX will spell the end of the Pasig River and of our people, our heritage, our mobility, our economy and our environment. The project will violate the constitutional right of all Filipinos, including generations to come, to a balanced and healthy ecology, â€they added.

The international non-governmental organization Conseil international des monuments et des sites which works for the conservation and protection of places of cultural heritage, also declared that PAREX “will aggravate traffic, benefit only a minority and kill the river, our patrimony”.

Meanwhile, as part of its commitment to the wider campaign to stop PAREX, Renacimiento Manila launched its Pasig River Heritage Appreciation Walk on Saturday which highlighted structures and heritage sites that would be affected by the artery.

Earlier this week, the group announced that they would be holding heritage walks on a variety of themes every Saturday morning throughout October.

“Knowing the cultural and historical importance of this area of â€‹â€‹the Pasig River is essential to understand why, from the point of view of heritage defenders, it is important that PAREX never sees the light of day,” Renacimiento Manila said in an article on Facebook.

Pasig River lovers and defenders also hosted a #IlogPasiglahin event, bike ride and ferry on October 2. They converged at the Escolta ferry terminal to take the ferry to Guadalupe and cycle back to Escolta.

“PAREX will have no impact on the heritage”

Amid the outcry over the proposed highway, magnate Ramon Ang assured heritage advocates that SMC’s PAREX would avoid the Intramuros region.

He denied an illustration of the supposed alignment of PAREX showing that he rubs shoulders with Intramuros circulating on social networks.

This was published by the landscape architect and urban planner Paulo Alcazaren who listed the heritage sites and structures that would be affected by the first segment of the proposed PAREX due to their proximity. He said these sites are protected by Republic Law 1066 or the â€œNational Cultural Heritage Law 2009â€.

Here are the heritage sites and structures that would be affected by the first section of the proposed PAREX. All these elements are protected by RA 10066. pic.twitter.com/MyK4oUSWnL

“For the record, according to the base line-up developed in consultation with and approved by the government, PAREX will not operate on the side of Intramuros, but on the other side, along Binondo,” Ang said in a report from The STAR. .

“Like many of those who oppose the project, we are also Filipinos who value our heritage sites, especially Intramuros, where we helped restore Manila Cathedral a few years ago,” he added. he adds.

Based on the 2021 SMC project description for the PAREX project scoping, the project size reads as follows:

â€œThe project includes the elevated 19.37 kilometer highway that will start from the western part of Metro Manila, starting with the San Nicolas and Intramuros areas in Manila and ending around the C-6, with a connection to the vicinity of the Southeast Metro Manila Highway in the Municipality of Taytay in the Province of Rizal.

Development of the PAREX project

SMC also presented these plans in an online public consultation on July 14.

SMC’s infrastructure engineer Edgar DoÃ±a then noted Renacimiento Manila’s request to include a heritage impact assessment for the project.

Meanwhile, the National Historic Commission of the Philippines, a cultural agency in the country mandated to “manage, maintain and administer national shrines, monuments, historic sites, buildings and monuments of significant historical and cultural value”, did not still posted commentary on the PAREX problem.

â€œAs far as PAREX is concerned, it is being reviewed by a lawyer and for the agenda of the NHCP board of directors,â€ said NHCP restoration architect Luisa Valerio. Philstar.com.

The mayor of Pasig, Vico Sotto, said last week that he had yet to express his opinion on the controversial project because he had only seen media reports about it.

“At the moment, they haven’t presented it to us in detail yet, so I will make a statement or express my opinion to the public when I know all the details of the project,” Sotto said after filing his certificate of candidacy for the post. mayor. .

In the meantime, various activities related to the opposition to PAREX carried out by various organizations are still ongoing.

Ang in the STAR report said that the issues raised by the public “can always be adjusted, based on contributions from government and stakeholders during the detailed engineering design phase.”