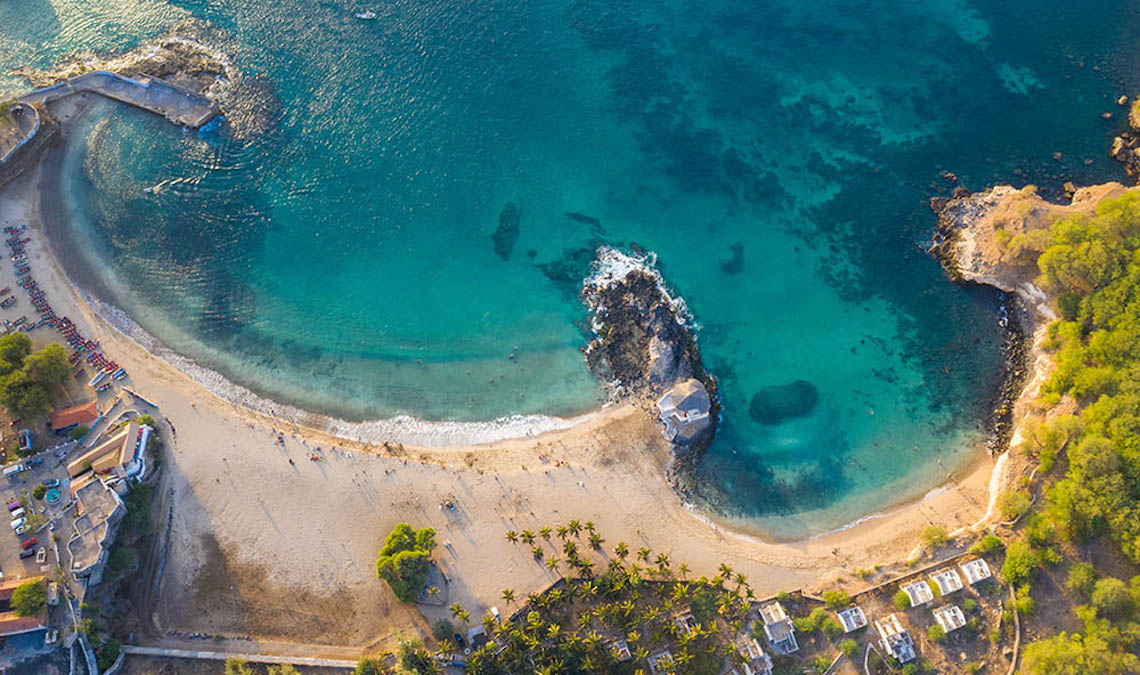 There is evidence that tackling small-scale problems is easier and yields better results. There are many examples of frustrated communities in South Africa struggling with a lack of water and widespread potholes that have turned their infrastructure into shambles. A recent example is in a small town in the Free State called Phuthaditjhaba, where the community formed an organization called MAP16, kicked out the ANC in a municipal election, and instead of queuing for 25 liters of water from two wells in the area – they now have running water from the tap. Carlos Amato writes in this Perspectives article, reproduced here with permission from FirstRand, about the success of courageous Cape Verde thriving despite few natural resources. Amato makes a compelling case for “smaller is better” and believes that big countries like the United States, Russia and Brazil are “generally bad for the health and well-being of the masses”. But he asks if countries can be divided peacefully, because secession is difficult to achieve. Ask the First Minister of Scotland, Nicola Sturgeon, who has just announced new plans for Scottish independence from the UK. She has already lost a referendum on the proposal and the likelihood of the current government giving her another chance is low. Yet there is a movement in the Western Cape to secede from South Africa. As a former chief negotiator in deliberations to achieve South Africa’s constitution, Roelf Meyer told BizNews that the road will be fraught with obstacles and requires approval from all parts of the country. –Linda van Tilburg

The great problem of small nations

Are small societies happier than large ones? Courageous Cape Verde and many other successful small nations seem to confirm this assumption. But the case for subdividing the great broken countries of the world is much harder to make…

Six hundred kilometers from the bulge of Africa lies a scattering of bleak, volcanic islands. Together they bear the name Cabo Verde, or Cape Verde. But the greenness of the name is misleading: the rain clouds don’t like this neck of the ocean, and the ground is parched. Consequently, the islanders – all 500,000 – have to import most of their food from overseas.

The sun loves the ten islands of Cape Verde, but the sun is its only true natural resource. And his story is steeped in pain and dislocation. The citizens are mostly descendants of African slaves, and even after Portuguese slavery ended in Africa in 1869, their exploitation continued as neglected colonial subjects of Lisbon until 1973.

Famine and disease have plagued these islands for centuries, and the lure of work in other, greener colonies has constantly drained the youth. “Cape Verde was born out of the experience of forced migration,” Edson Brito, a historian at the Cape Verde Institute of Cultural Heritage, told AlJazeera.com.

A moving legacy of this diaspora is the national folk song form – the morna – made famous by the late great Cesaria Evoria. His definitive morna, Sodade (the word means deep, nostalgic melancholy), was composed in 1954 by a man known to history only as João, for his girlfriend, Mariana dos Santos. She was about to board a boat for the plantation island of São Tomé, 4000 km away.

To this day, most people born in Cape Verde live abroad. It can cost more to fly between two of the ten islands than to fly from the capital Praia to Lisbon. And the national tourism-dependent economy has little room to maneuver against global turmoil; when the world coughs, Cape Verde gets bronchitis.

So far, so difficult. But take a closer look at Cape Verde and you will see an archipelago of small miracles. It is one of the most democratic countries in Africa – regularly vying with Mauritius and the Seychelles for the top spot on the Ibrahim Index of African governance, for example.

The country has suffered neither coups nor revolutions since independence in 1973. Speech is free. Lured by growth, the rule of law and good governance, many ambitious West Africans are choosing to migrate there rather than to Europe – and a growing minority of the Cape Verdean diaspora are returning home.

A vibrant architectural scene, known for bold projects such as the Vessel of Return, a floating music complex in Praia designed by Nigerian star architect Kunle Adeyemi, adds to the mood of national confidence. The Caboverdeans also play football, sending gifted players straight to the big leagues. The diaspora is equally rich in footballing talent; the likes of Patrick Vieira, Henrik Larsson, Nani and former Tottenham manager Nuno Espirito Santos are all of Cabo Verdean descent.)

GDP growth has averaged above 5% a year for the past decade, excluding the disastrous pandemic year of 2020. And Caboverdean’s recovery from that calamity was Africa’s dream du Sud, with expansion expected this year to reach 6.5%.

What’s going on? How can such a ostensibly unlucky country become so good? A report by the African Development Bank argues that Cape Verde’s success was born out of a fundamental recognition of its smallness and weakness. You feel this deeply when you are stuck on a volcanic rock in the ocean, and it is a feeling that focuses the political mind. Not surprisingly, the other two African governance champions are island states.

Knowing they had no natural resource cards with which to play the kind of poker enjoyed by autocrats in the oil states, Cabo Verdean leaders have always sought to ingratiate themselves. They have quietly cultivated powerful allies, whether domestic or multilateral, Western or East Asian.

From the 1970s, Cape Verdean governments continued to abide by the conditions for reform set by international lenders, investors and donors – conditions often condemned as neocolonial interference by African commentators – knowing that their citizens would be the ultimate beneficiaries if these reforms were carried out correctly. First, abundant and cheap credit was obtained by respecting the objectives of the reform of the State; second, the improvement in tax collection has reduced the state’s dependence on this credit. And the leaner state made the surplus for reinvestment even greater.

It was essential that the people of Caboverdean still knew about the plan and widely supported it. It also helped that there were only 500,000; Anyone who has attended too large a business meeting knows the dangers of too many voices, whether they are heard or not. If too many people talk, nothing is achieved. If too few people speak, everyone is unhappy. But a small country can hear itself think.

Basically, a small country has few hiding places. The rich and powerful cannot escape the censorship of the powerless, even if that censorship is silent. Islands in particular can look like the deck of a very large ship; mutiny is always a possibility. And in remote places where environmental conditions are harsh, the culture of mutual responsibility is usually deepened.

It’s no surprise, then, that countries with lower populations are on the whole better places to live – they tend to be wealthier per capita, even when no fossil fuels are involved. But competitive advantage goes far beyond money. Small states benefit from deeper social compacts, with more adaptable and accountable leaders who tend to share their worldviews with most citizens. Costa Rica, New Zealand, Uruguay, Ireland and all the Nordic states all offer compelling arguments for the small country advantage.

There are exceptions, but the resource curse often makes the difference. Most small, oil-rich countries, from Equatorial Guinea and Gabon to the Gulf monarchies, are blatantly autocratic, oligarchic or kleptocratic. Norway is the outlier, paving the way for small fossil fuel-powered states.

As many American, Russian, Brazilian or Indian citizens will tell you, populated countries are generally bad for the health and well-being of the masses. The locked-in complexity of great democracies prevents the kind of rational decision-making that produces rapid progress; bear witness to America’s failure to control guns or socialize its health care system, despite its abundance of citizens and leaders who can see the problem and its solution. Cultural fissures deepen mistrust and increase the risks of state violence. Large countries are harder to reform democratically, harder to uplift and equalize economically, and harder to unite around a compelling national vision – unless leaders apply the destructive force of authoritarian rule to do so. .

Scale matters when it comes to effective democracy and governance, says Greg Mills, director of the Brenthurst Foundation and author of several books on African political economy. “Smaller size lends itself to political liberalization, in part because leaders are in touch with their constituents, infrastructure is better (and governance therefore easier) over more concentrated geography, and there are fewer divisions ethnic and other less complicated to manage.” As a result, smaller African states like Cabo Verde have tended to fare better, Mills says.

Which raises a hypothetical question: in an ideal world, should large, dysfunctional countries be peacefully and democratically subdivided? It’s hard to argue that the citizens of the United States would be a healthier and happier group of humans if they were divided into two regimes – a blue urban coastal country and a red hinterland rural country.

But as the Catalan experience of recent years shows, secession is not an easy task. It can be unjust and undemocratic even when pursued peacefully, and even when the majority of the secessionist “country” may want out. National borders may be the arbitrary traces of various waves of war and imperialism, but once they have settled there is a pragmatic and democratic logic in treating them as final.

As for the borders of Cape Verde, they have long been finalized by the waves of the Atlantic. But the loneliness of these happy islands is not final: Mariana, of Sodade fame, has finally returned from São Tomé after 10 years of low-wage work.

She never saw João again, but for decades she continued to hear his song. And she has not forgotten it.