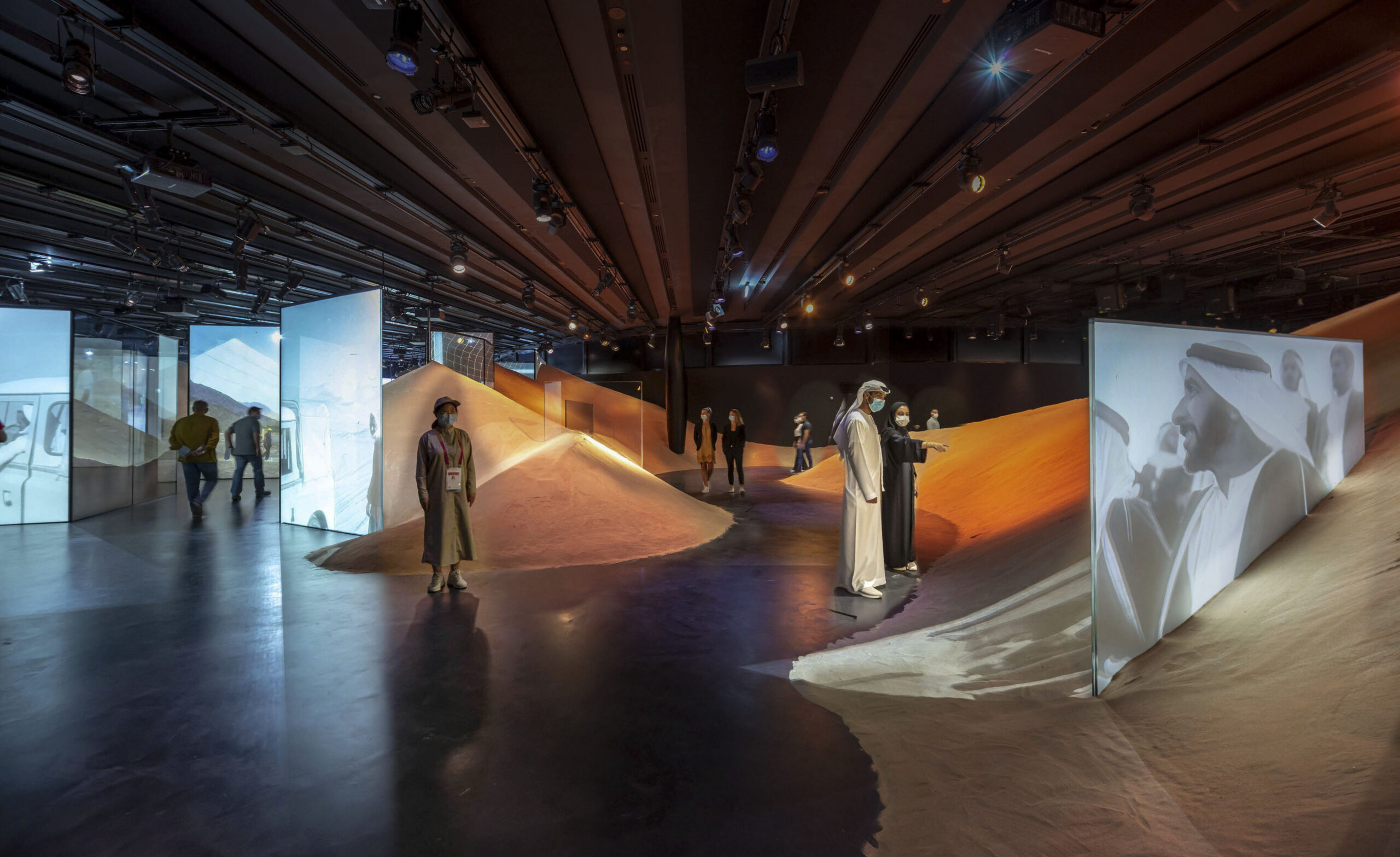 Admittedly, the past few years have been busy for the studio. Founded in 2000 by American designer Matt Cottam, Tellart’s work combines product design and prototyping with film, video and physical computing. Prior to Expo 2020, Tellart worked with corporate clients including Google, Facebook and Toyota, to name a few. The company also currently produces Non Fiction Designa series of filmed conversations with a range of artists, designers, academics and tech personalities, about transforming the dot-com crash of the late 1990s into the rise of intelligence artificial.

Not to mention that Cottam’s hobbies arguably make him a suitable Wes Anderson character, but more on that later.

In 2019, Tellart partnered with renowned Swedish-American architecture firm Snøhetta to create an interactive exhibit that would demonstrate the value of global biodiversity to The Ark, a new massive timber visitor center to be built on the remote archipelago of Svalbard at the Global Seed Vault, a seed storage facility. At the center of the project is a dramatic multi-story space marked by a single living tree, surrounded by floors and walls that act as screens to communicate not only the importance of biodiversity and a window into the Global Seed Vault, but a message about protecting our cultural heritage, with a variety of archived artistic and cultural content, from Vatican manuscripts to music videos of football star Pelé.

In 2018, the Victoria & Albert Museum in London commissioned Tellart to create an installation for The future starts here, an exhibition exploring the implications of rapidly changing technology. by Tellart Terraforming table allowed visitors to shape landscapes and seascapes with their hands: a fun approach to thinking about the daunting climate crisis. Consisting of a depth-sensing camera and a projector above a sandbox, the table allowed people to shape the sand into different topographies with their hands – peaks, valleys, ocean floors – that the camera and the projector would then color code for land or water to instantly create a new map.

Originally from Newport, Rhode Island, Cottam founded Tellart just months after earning degrees in industrial design and fine arts from the Rhode Island School of Design and then served as an adjunct professor for ten years (he now teaches at the Copenhagen Institute of Interaction Design).

Cottam comes from a family of designers. After emigrating from the Azores to New England, her grandmother worked in a textile factory. “Her job was to translate colored pencil drawings by fashion artists into designs that could be mass-produced,” explains the designer. “I didn’t realize it until I was probably in my thirties, but what she basically did was industrial design.”

Obtaining a master’s degree in interactive design from Sweden’s Umeå University in 2009 helped Cottom consider new directions for the company. “For a long time, our work was very physical and technological, but we weren’t involved up front with the ideas behind the content,” he says. “Over the past 10 to 15 years, we have been brought into the realm of research, to find history and bring it to life as a multi-sensory, immersive, [time-based] physical experience.

One of the first projects combining craftsmanship and technology involved the Science Museum in London. Chrome Web Lab: Making the Internet Physical, created in partnership with Google, enabled online users around the world to interact with museum visitors and make music and art together, including the Universal Orchestra, an ensemble of musical instruments. eight musicians inside the museum that invited visitors on-site and online to play live music together. A robotic installation called The Sketch Bot transformed digital photos submitted by physical and online visitors into sand drawings. The two concepts foreshadowed by nearly a decade how the pandemic would make those interactions (especially video platforms like Zoom) essential.

Cottam knows all about immersion, and not just at work. A member of the Royal Ocean Racing Club, he has crossed the Atlantic many times. He is also an avid alpine skier and scuba diver. Additionally, he became passionate enough about family history to be a member of the Sons of the American Revolution and the General Society of Mayflower Descendants.

“I need an activity to meditate. I have to sail through 30ft waves for 12 hours straight,” he says. “Skiing does the same thing. Scuba diving does the same thing. You tend to be silent when concentrating, especially when you have practiced and developed a technique to the point where you are able to partner with nature instead of [trying] to overcome it. You dive and maintain your depth only with your breath, not by swimming with your arms, or you ski by simply letting the fall line push you into the next turn instead of wiggling your body all over the place.

It’s not just intense sports that give Cottam an adrenaline rush. A licensed EMT, he worked as an advanced paramedic with the US Federal Disaster Medical Team and the National Ski Patrol. “There’s something amazing,” he says, “about becoming extremely calm when it seems like things are abnormal or out of control.”

This explanation makes sense given how Tellart can leverage a variety of media, materials, and technologies to present ideas. “I believe that design is an act of discovery. I’m really disappointed when some designers, whether they’re students or people we collaborate with, feel like design is just about prescribing our big ideas instead of setting up scenarios or conditions where you have interaction with a set of tools and materials.”

Not far to go for South Devon challenge crew

Most travel-related quarantine rules will expire Feb. 25; The test obligation may remain