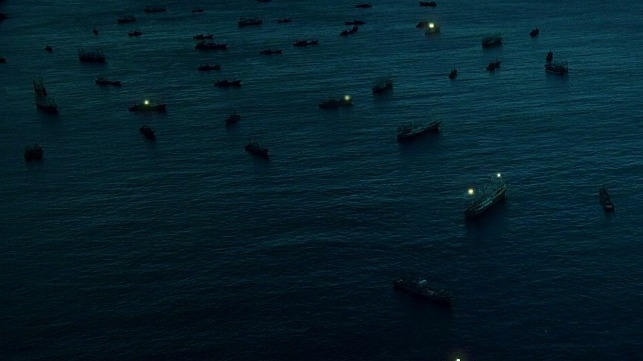 If you look at the taxonomy of crime taking place overseas, it is both diverse and acute. And yet, illegal fishing is at the top of this hierarchy. A global company estimated at $10 billion in annual revenue, which thrives on improved technology that has enabled fishing vessels to raid the oceans with greater efficiency.

The Thunder thrived in this context. Interpol had issued a purple notice on the vessel, the equivalent of adding it to a most wanted list, a status reserved for only four other vessels worldwide. The ship has collected more than $76 million in illicit sales over the past decade, more than any other ship, according to agency estimates.

Banned since 2006 from fishing in Antarctica, the Thunder had been spotted several times in recent years. In 2015, this is where the environmental organization Sea Shepherd found them. Speaking through a translator, Peter Hammarstedt, Captain of the Bob Barker, warned that the Thunder was prohibited from fishing in these waters and would be arrested.

It was the start of an extraordinary chase and the subject of the second episode of The Outlaw Ocean podcast, CBC Podcasts and the LA Times. Listen to it here:

For 110 days and more than 10,000 nautical miles across two seas and three oceans, the Bob Barker and a companion vessel, both operated by Sea Shepherd, followed the trawler, with the three captains close enough to watch each other’s smoke breaks and deck workouts. In an epic game of cat and mouse, the ships maneuvered through an obstacle course of giant ice floes, endured a cyclone-like storm, faced clashes between opposing crews and nearly collided in this which became the longest pursuit of an illegal fishing vessel in history.

As reported by The Outlaw Ocean Project, a non-profit journalism organization, whose reporter was aboard the Bob Barkerthe pursuit ended with a distress call from the Thunder. “We are sinking,” pleaded the Thunder captain over the radio. Vessels operated by Sea Shepherd rescued the crew and attempted to gather evidence of their crimes before the vessel sank to the bottom of the ocean.

They took them to the nearest port authorities in São Tomé and Príncipe, where the thunder the senior members of the crew were arrested. Three officers have been charged with various charges, including pollution, negligence and forgery. But the loss of the vessel – and accompanying evidence, including fish in the hold, on-board computers, various records and fishing gear – makes prosecution more difficult, Interpol and Sea officials have acknowledged. Shepherd.

The second episode of The Outlaw Ocean podcast also touched on another notorious case related to illegal fishing that happened off the coast of North Korea.

The battered wooden “ghost ships” drift in the Sea of ​​Japan for months, their only cargo being the corpses of starving North Korean fishermen whose bodies have been reduced to skeletons.

For years, the gruesome phenomenon mystified Japanese police, whose best guess was that climate change has pushed the squid population further away from North Korea, pushing the country’s desperate fishermen dangerous distances from shore, where they get stuck and die of exposure.

But an investigation by The Outlaw Ocean Project, based on satellite data, has revealed what marine researchers now say is a more likely explanation: China is sending a previously invisible armada of industrial boats to fish illegally in North Korean waters. , violently displacing the smaller North Korean ships. boats and spearhead a decline in once-abundant squid stocks by more than 70 percent.

Chinese vessels – nearly 800 in 2019 – have violated UN sanctions that ban foreign fishing in North Korean waters. The sanctions, imposed in 2017 in response to the country’s nuclear tests, aimed to punish North Korea by not allowing it to sell fishing rights in its waters in exchange for valuable foreign currency.

The episode explores what experts have called the biggest known case of illegal fishing perpetrated by a single industrial fleet operating in another country’s waters.

Ian Urbina is the director of The Outlaw Ocean Project, a Washington DC-based nonprofit journalism organization that focuses on environmental and human rights issues at sea around the world.

The views expressed here are those of the author and not necessarily those of The Maritime Executive.