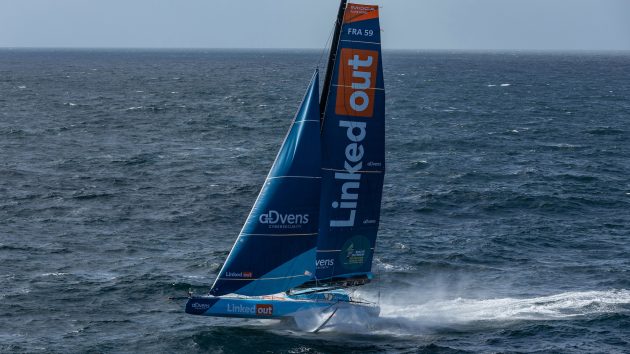 Thomas Ruyant sail LinkedOut won the IMOCA 60 class in 2022 Rum Route after a tight battle between him and Charlie Dalin sail Apivia.

While Dalin led the race from the start, and had a 90 mile lead when passing a ridge of light winds past the Azores, Ruyant snuck in to the west and outflanked Dalin on Friday morning and took the lead he held until this finish line this morning, Monday 21 November. Dalin was just over eight miles behind when Ruyant crossed the finish line to take the biggest win of his career.

“I don’t hide it, I’m only here to win. That’s all I care about. I have one of the best boats in the fleet. There are newer boats on the start line but our Verdier 2019 design is fully optimized to the highest level of development,” said Ruyant in Saint Malo. Winning is a well-deserved farewell to Ruyant’s boat, which he is replacing with a new IMOCA 60 before the Vendée Globe 2024.

Dalin has been the top performer in the IMOCA fleet of late, winning the vast majority of races, but Ruyant has also been impressive and the two have never been far from each other. In fact, the duo’s fights go all the way back to the last Vendee Globebattling for the lead until Ruyant broke his port foil early in the Southern Ocean and finished sixth.

Both sailors waiting for their new boats they were expected to strive to win, with the consequences of any damage being slightly less than newer boats or boats they plan to sail in future races .

Right now it seems like Jeremiah Beyou navigate its brand new Charal The IMOCA 60 will be the third skipper at home, a good result as he looks to fine-tune his radical plan ahead of the upcoming Vendée Globe. Still in a brand new boat, Kevin Escoffier should finish just behind Beyou at some point today. Both skippers will be pleased with their results on new boats and will see this performance against two highly optimized IMOCAs as a good indication of the potential of their new designs for the future.

Another two-way battle concluded this weekend as French solo skipper Erwan Le Roux sailed his Ocean 50 Koesio across the finish line first in the early hours of Sunday morning narrowly beating runner-up Quentin Vlamynck (Arkema) after biting his nails head to head on the last miles around the west of Guadeloupe.

The duo were only a hundred yards apart on Sunday, but the older and more experienced Le Roux, 47 (who won this class in 2014) stayed wide at the south turn around from the island, caught more breeze and finished just 18 minutes and 13 seconds ahead of Vlamynck, 29, who led for much of the race but was caught by Le Roux on Saturday night at the final approach to Guadeloupe.

Le Roux said: “It was amazing what we did with Quentin. We were neck and neck in a small group for a long time every time we looked at the rankings. Primal backed off and I ended up with Quentin. I dreamed of arriving at Tête à l’Anglais alongside him when we trained together.

The leaders of the Class40 The fleet is now also approaching the finish line with the best Class40 sailors mixed with the tail end of the IMOCA60 class.

There are still around 600 nautical miles to go in their race, but it looks very good for Yoann Richomme at the moment. Paprec Arkea who is 125nm ahead of second Corentin Douguet who is locked in a fierce battle for second place with Ambrogio Beccaria with the pair currently less than a mile apart.

If you enjoyed this….

Yachting World is the world’s leading magazine for offshore cruisers and offshore sailors. Every month we bring you inspiring adventures and practical features to help you realize your sailing dreams.

Expand your knowledge with a subscription delivered to your door. See our latest offers and save at least 30% on the sale price.