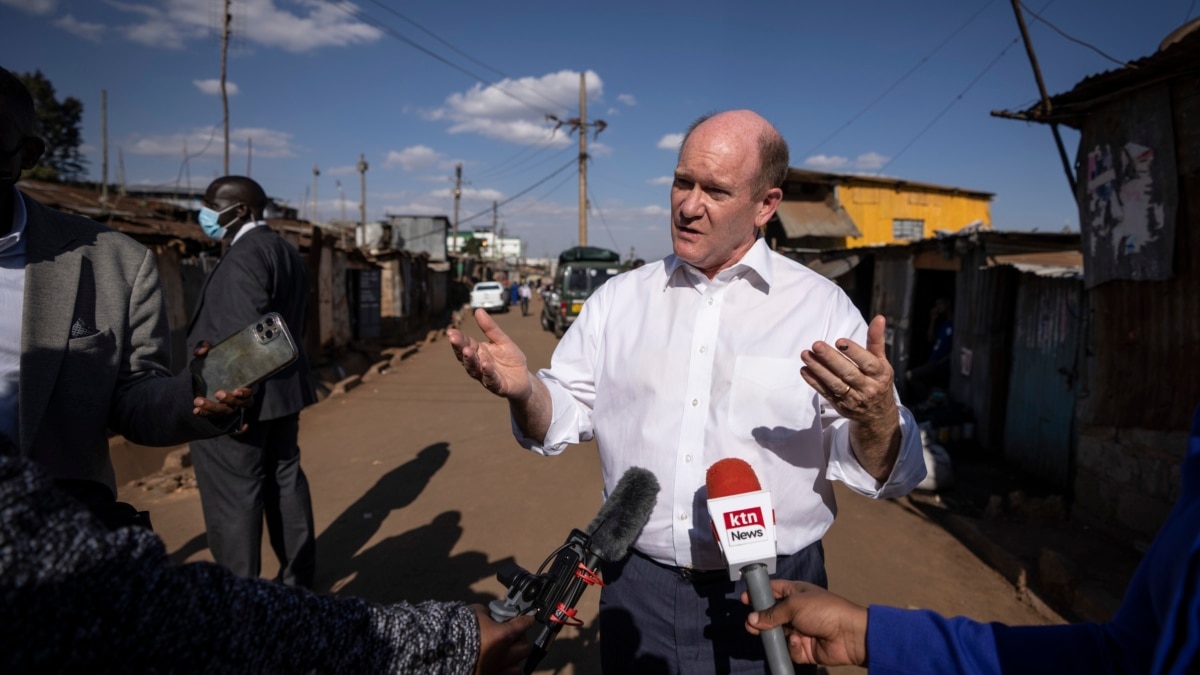 A visiting US senator says he encouraged Kenya’s incumbent president to participate in a “peaceful transition of power” amid the latest election crisis in East Africa‘s most stable democracy.

“I’ll let the president speak for himself, but it was certainly a hope that I expressed today,” Senator Chris Coons told The Associated Press after meeting President Uhuru Kenyatta on Thursday. He said they had discussed ways in which Kenyatta could play a “constructive peacemaking role” after leaving office.

Kenyatta has remained publicly silent since the August 9 vote, adding to anxiety as Kenya once again faces post-election uncertainty and a likely legal challenge by losing candidate Raila Odinga. Coons, leading a congressional delegation on a visit to five African countries, was partly in Kenya to meet with key parties and urge continued calm.

Kenyatta had backed his longtime rival and opposition leader Odinga in the close race against his own vice president, William Ruto, who fell out bitterly with Kenyatta years ago. Ruto was declared the winner on Monday, but not before Kenya’s most peaceful election had ever descended into chaos in the final moments.

The electoral commission split in two, each side accusing the other of wanting to tinker with the results. It came as a shock to many Kenyans after an election widely considered the country’s most transparent ever, with results from more than 46,000 polling stations posted online.

Now Odinga will almost certainly challenge the results in the Supreme Court. His campaign has seven days from Monday’s statement to do so, and the court will have 14 days to rule. Odinga urged his supporters to remain patient instead of taking to the streets in a country with a history of sometimes deadly post-election violence.

After meeting with Kenyatta, Odinga and Ruto, Coons told the AP “I was heartened by the fact that in all three meetings we heard a commitment to a call for calm and quiet, respect for the processes established in the 2010 constitution”. He said the conversations focused on the rule of law, the importance of free and fair elections and peaceful transitions.

“Obviously the United States has had a very difficult experience with these issues over the past few years,” Coons said, referring to the Jan. 6, 2021, attack on the U.S. Capitol as former President Donald Trump was trying to stay in power. “I said in all three meetings that we have things to learn from Kenya.”

Kenyatta told Coons that Kenya would maintain “its position as a shining example of democracy on the continent by maintaining peace during this transition period”, according to a statement issued by the president’s office.

Coons said he did not come to Kenya to seek anything like the handshake that Kenyatta and Odinga, after pushing, shared to end months of crisis following the 2017 elections, which the results were overturned by the Supreme Court for irregularities, a first in Africa. Odinga boycotted the new vote and declared himself “the people’s president”, bringing allegations of treason.

This time, with Kenyatta’s backing, Odinga’s campaign believed he would win the presidency after a quarter century of pursuit.

Kenyatta is stepping down after two terms, a notable move in a region where longtime presidents like Uganda’s Yoweri Museveni and Rwanda’s Paul Kagame have been accused of clinging to power by changing term limits, manipulating elections and suppressing dissenting voices.

The US delegation is also visiting Rwanda, where human rights and violent tensions with neighboring Congo are almost certainly on the agenda after Secretary of State Antony Blinken’s visit last week. Coons said he was looking forward to visiting Kagame.

Kenyatta has played a leading role in efforts to calm Rwandan-Congolese tensions and attempt to mediate the deadly Tigray conflict in neighboring Ethiopia, with US support. .

Ruto’s public comments this week focused on domestic issues, not foreign ones, but Coons said the president-elect had ‘expressed concern and intent in trying to help bring about positive resolutions’ in such regional crises. .

Coons also played a role in trying to calm the conflict in Ethiopia. But he told the AP that the delegation had no meeting with the Ethiopian government or Tigray forces while in Kenya.

Coons, a member of the Senate Foreign Relations Committee, and his delegation have already visited Cape Verde and Mozambique and will also visit Tunisia.