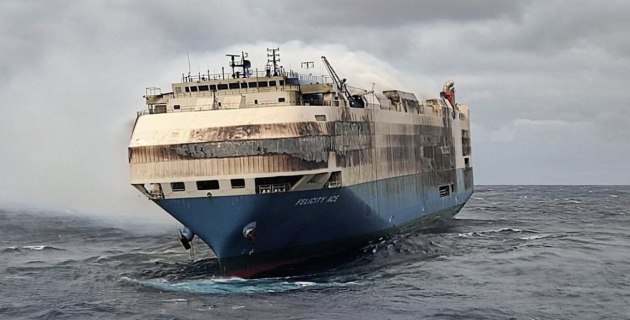 Car transporter Felicity Ace, which caught fire with nearly 4,000 VW Group vehicles on board near the Azores coast last month, has sunk according to reports from Automotive News Europe.

It is believed that the shifting of cargo or the accumulation of water on the cargo decks could have caused destabilization.

“The weather was pretty rough there,” said MOL Ship Management spokesman Pat Adamson. “Then she sank, which was a surprise.”

The wreckage will likely lie thousands of meters under the sea. On board the 17-year-old roll-on/roll-on vessel were a total of 3,965 new vehicles, including Volkswagen models, around 189 Bentleys, 1,100 Porsches and “a number of Lamborghinis,” a Volkswagen Group spokesman said. time.

Last week, Reuters quoted João Mendes Cabeças, captain of the port of the Azorean island of Faial, as saying that “the intervention (to put out the fire) must be done very slowly. It will take a while.”

Mr Cabeças said that since traditional water fire extinguishers could not prevent lithium-ion batteries from burning, components of electric vehicles were “keeping the fire going”, adding that specialized equipment to put out the fire was on the way. It was not known what started the fire.

Volkswagen had feared that many (if not most) of the cars on the ship were unrecoverable, with brands and dealers advising customers that vehicles bound for the United States were unlikely to be delivered. Car damage is covered by insurance, the automaker said last week.

In one projection (assuming all vehicles would be lost), risk modeling firm Russell Group estimated that the incident could cost the VW Group at least $155 million (A$213 million), Automotive News Europe reported. About $438 million (A$603 million) of goods were on board the vessel (retail value), of which the cars were worth $401 million (A$564 million)