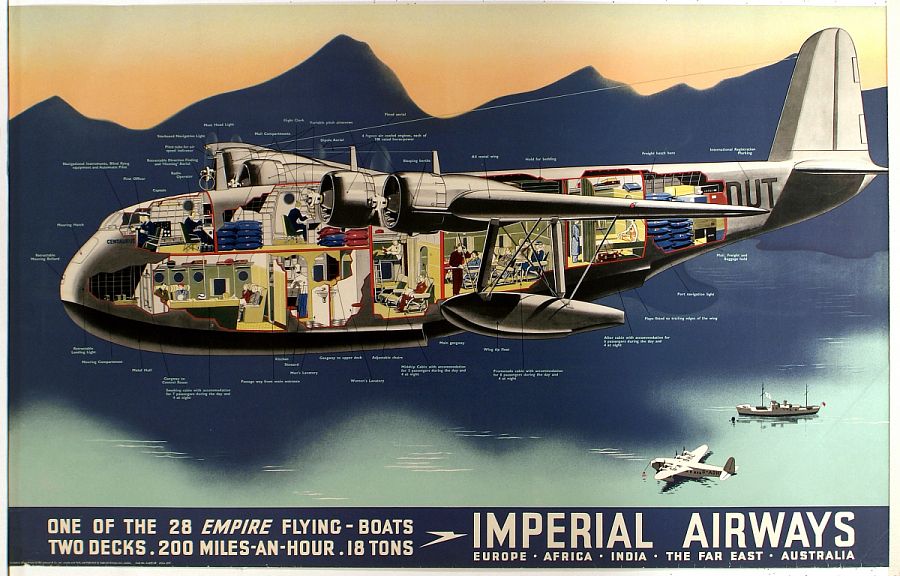 The first seaplane flight took place in 1912, but it was not until 1938 that the government decided to establish a seaplane base in Lisbon. Can you imagine taking your hand luggage on a boat to the seaplane waiting for you in Cabo Ruivo. Curiously, Portela airport opened on October 15, 1942, four years later, during The Second World Warand initially operated in conjunction with the Cabo Ruivo Seaplane Base. Seaplanes made transatlantic flights and passengers were transferred to continental flights operating from the new airport. The future of air travel was changing rapidly.

The Wright brothers managed to get a “serious” airplane into the air in 1903, but it took many years of experimentation and development before something resembling an airliner made its first flight. Portugal featured frequently from the early days. In 1919, a US Navy seaplane traveled from Newfoundland to Portugal via the Azores and then flew to England. It was a 23 day trip with over 54 hours in the air. Don’t complain about flights that take two or three hours to reach Portugal these days.

Crossing the oceans was the big challenge

Land flights were not as difficult as crossing the ocean. These shorter distance flights began in the 1920s, but did not begin to attract many passengers until the 1930s. The flights were long with frequent refueling stops, bumpy to put it mildly. Passengers frequently sat on wicker chairs, but they were served up to a seven-course meal. The in-flight entertainment systems also looked quite different. Today, in-flight entertainment is a lonely, high-tech affair, but in the early days of flight, passengers typically crowded around a single screen if they wanted to see a movie. One of the first films to be shown overhead was Sir Arthur Conan Doyle’s ‘The Lost World’ in 1925 with Imperial Airways.

The big goal was to cross the Atlantic to North or South America and Pan American achieved this in 1939 with its “Yankee Clipper” or “flying boat” aircraft. The main starting points were Southampton and Lisbon. You can fly overland, but with a few stops and transfer from Lisbon airport to the docks to a waiting seaplane. Lisbon was a main stop for flights to Africa.

The end of the era of flying boat airlines came after World War II. Seaplanes were designed because there were originally very few long runways that could accommodate a large airliner. Additionally, navigational aids at the time were minimal, and bad weather often meant that planes had to land with a crosswind. The flying boat has overcome all these things perfectly with ready made water tracks available all over the world.

And on February 23, 1939, the greatest incarnation of seaplanes, the Boeing 314, made its maiden flight from San Francisco to Hong Kong. The California Clipper had comfortable seating for 74 people (berths for 36), a separate dining room where passengers received full meals, separate bathrooms for men and women, a luxury compartment for VIPs, changing rooms and a dedicated lounge. Try selling this idea to Ryanair.

After the war, the development of conventional aircraft accelerated at high speed, in particular due to the experience gained with wartime bombers which had better range and could carry a large payload.

Speed ​​and convenience increased, but luxury disappeared as demand increased and the rule was imposed on as many people as possible in the most economical way. The glamor of flight was gone.

Bring back a comfortable trip

What many people want is to be able to travel to Portugal by train. Flying has long lost its glamour, and the hassle of airports is time-consuming and frustrating. The EU and rail operators are fully aware of this and are moving faster than you might think. Budding operators such as Midnight Trains are working hard to bring luxury sleeper trains into service, companies such as Nightjet are already operating. Five years ago, sleeper trains everywhere were closing, rolling stock was old and unable to reach the speeds the future of train travel would demand. This changes quickly due to demand.

Spanish operator RENFE is determined to start St. Pancras International operations in Paris and beyond. According to the general management of Getlink, the operators of the Chanel tunnel, RENFE could soon obtain its license.

Once granted, the infrastructure for direct high-speed rail travel from London to Madrid and Seville is already available. If passenger demand is there, there’s no practical reason why it shouldn’t become available quickly. Madrid to Lisbon remains the last obstacle to high-speed rail to London in Portugal.

The European Commission has approved €265 million in funding from the European Regional Development Fund for the improvement of a 178 km railway section forming part of the Madrid-Lisbon high-speed line on the Atlantic corridor.

1.56 billion euros is the total value of the project which is expected to be completed in December 2022. According to official reports, the line between the Spanish border and Lisbon is currently expected to open by 2030.

You can already travel from London to Lisbon via Barcelona and Madridbut what most people want is direct high-speed sleeper service The return of the comfort and ‘glamor’ of travel is closer than you think, but it won’t be by air , the train is the future.

Disclaimer:
The opinions expressed on this page are those of the author and not of The Portugal News.